December 11, 2011
The Panjab Cultural Association (PCA) UK have released the website on the translations of Dr John Leyden. Dr Leyden who was a linguist and translator had gone to India in 1805 and started working on translating several Indian works amongst them was the works related to the Panjab. These texts are now in the British Library in the UK.

I was fortunate to understand the significance of these translations in the last decade. The discovery of the Prem Sumarag Granth translations was important for several reasons a) it being the first translation of the text b) providing crucial evidence against those who were pushing the argument that the text was that from the 19th century.


The website covers the life of Dr Leyden and the translations of the works including Sri Bachitra Natak and the Prem Sumarag Granth.

In 2012 i will be releasing the full book on the significance on the these translations. 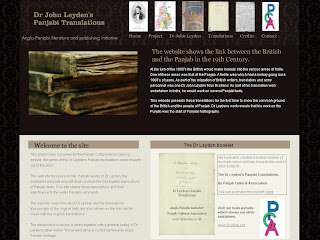