The traditional view about the Sri Dasam Granth Sahib –‘The Global Vision of Guru Gobind Singh that is’.

This tukh from the Sikh nitnem always hits hard, it resounds in my mind at the crescendo of the prayer. It always resonates deeply, and it seems to that the Guru intended this to be the case. He emphasizes that true love is the only way for mankind’s emancipation. Without love and passion in our prayer, simran and seva, it is just empty ritual. In the words of the Sufis, it is love that is the Divine wine that fills up the cup. This verse by Guru Gobind Singh daily reveals to us the ultimate truth, and is specifically in the third nitnem bani the Tav-Prasad Svaiye, which is a part of the longer Sri Akal Ustati. In the rest of the composition he reiterates that without bhavana or heartfelt devotion all religious rituals, however elaborate and splendid, are nothing but mere illusions. What is surprising is that a composition that shows the universal nature of Sikh Dharam is now subject to a constant barrage of doubts and criticisms.

The Sri Akal Ustati is the celestial bani of Guru Gobind Singh and forms part of his majestic writings called the Sri Dasam Granth Sahib. It is the second bani after Jap Sahib in his temporal scripture. As aforementioned, the particular stanzas of this bani are referred to as Svaiye (Tav-Prasad Svaiye) and as well as forming a part of the Sikh liturgy, they are also verses recited as part of the initiation of the Double-edged Sword, known as Khande ki pahul. Parts of this composition are recited as part of Kirtan at Darbar Sahib, Amritsar - the holiest shrine of Sikhism. One of the most notably lines in the composition is the frequently quoted and celebrated, Manas ki jaat sabhai ike pachanabo: recognise mankind as one. The celebrated line is by one writer who has one global vision of mankind.

Guru Gobind Singh had a profound vision and it is widely accepted that Sri Akal Ustati is a creative masterpiece which weaves the universality of God and the transcendence of Akal, in reference to the many cultures and religions of the world. Yet in a recent article by IJ Singh 'SIKHI: The Global Vision That Was', he sits on the fence regarding the Sri Dasam Granth Sahib and sadly this only allows ignorant people to create even more ambiguity, and make the universal bani of Guru Gobind Singh into a debatable farce. In this world would the same doubt driven rhetoric be allowed to spew forth regarding the Holy Bible, Qu'ran, Vedas, or Torah? We would think not, but now pseudo-scholars have no ethical consideration for people who consider the Sri Dasam Granth Sahib to not only be authored by Guru Gobind Singh, but a mirror in which one sees his holy radiant face. After all in their eyes the bani is mukhvak literally from the radiant face of the Guru.

IJ Singh in his write up makes a slip regarding the scripture by incorrectly citing the number of 'pages' in Sri Dasam Granth as 2300. It is unclear which Granth he has been looking at but the Sri Dasam Granth has 1428 folios in the standard print. Unfortunately, when we do not research properly, we make up statements about Guru Gobind Singh's Granth without knowing about its status in the canon, its creation, and compilation. He states 'Dasam Granth has a controversial place in Sikh psyche, history and tradition', a very bold statement made by a gentleman who claims by his own admission to be 'non-scholarly'. In actual fact, before 1902 and British colonialism there was no debate about the Sri Dasam Granth Sahib. The first reference to any authorship issues was not written by a Sikh but an intelligence officer of the British Army, aptly named Cunningham.

He states 'Scholars as well as the larger Sikh community agree that many parts of it are the authentic writings of Guru Gobind Singh but that they also appear mixed with compositions that may not be his but come from various sources of that time.' It is unclear which scholars he is referring to as the only a handful of scholars have studied the Sri Dasam Granth in any depth and they are of the unanimous conclusion that every word is that of the Tenth Master, including Dr Jaggi who changed his stance on the scripture a year after writing his thesis. Generally, the Sikh community believes firmly in the Sri Dasam Granth, for example important Jathebandis of the Khalsa: Akali Nihangs, Udasis, Nirmala, Sevapanthis, SGPC, 3HO, AKJ and Dam Dami Taksal. All of whom have issued formal written confirmation about the important status of the Sri Dasam Granth Sahib. In fact, all the traditional schools of exegesis created by the Gurus are united by their faith in the ‘Holy Scripture of the Tenth Guru.’ Furthermore all the thrones of Sikh Polity (Takht Sahibs) agree that the Sri Dasam Granth is the work of Guru Gobind Singh. On the other hand, it is fringe groups such as missionaries (one must think why they called themselves missionaries) and those people who believe in the complete division between the religious and secular ‒ a modern notion, who cannot fathom the words of Guru Gobind Singh, that are based on the tradition of miri-piri inaugurated in the Sri Akal Takht Sahib by the Sixth Master. Two other thrones (Takht Patna Sahib and Takh Hazur Sahib) have the prakash of Guru Gobind Singh’s scripture next to the Guru Granth Sahib just like the in the days of the Khalsa Raj. This puritan maryada is in fact on the increase around the world and will continue as the Khalsa goes back to its roots. The larger Sikh community recite the Ardas (Chandi di Var), and read verses from Ram Avatar (Rahiras) daily, therefore they recite from Sri Dasam Granth whether they know it or not.

IJ Singh states that compositions in the Granth may come from sources of that time. Can he tell us which sources of the time he is referring to? Anyone can make a statement but concrete research is limited to a handful, and IJ Singh should refrain from doing so, if he has not researched primary sources himself. In his write up he makes statements similar to those that have Sri Dasam Granth phobia before him. The Sri Akal Ustati has one simple message, that mankind maybe composed of different cultures but in essence they are the same and all bound by the confinements of Kal (time) and Akal (Timeless). In fact the Guru states that every living entity, in all realms, is subject to time, decay, and death. Only the name of Akal, if repeated just once fully, can save man. This is the same as the theology of Adi Guru Granth Sahib Maharaj. The profound vision of the Guru is not only evident in Sri Akal Ustati but throughout the Sri Dasam Granth Sahib. This is also notable in the didactic Charitropakhyan where again the Tenth Guru cites religious anecdotes from different cultures and religions to describe the types of relationships between man and woman. Within this composition the Guru tells his Sikhs four-hundred and five stories from the Panchtantra, Hitopdesh, the arabic Alif-Laila, the Qu'ran, the Bible, Buddhist Jhatka tales, Persian Shahnama, and the Sanskrit Purans. This literature was written to instruct Kings and Princes in morality and ethics. In the climax to the four-hundred and five stories, in the Chaupai Sahib, the Guru says 'Sewak Sikh hamare tariye', 'Akal Purakh please protect my servants and Sikhs'. This leaves us with no doubt about the authorship of the Sri Dasam Granth Sahib. It is sad that the Granth in which the Tenth Master offers the Khalsa Raj to his Sikhs is now the subject of much controversy and insults.

The Lord is One and he can be attained through the grace of the True Guru.
Copy of the manuscript with exclusive signatures of the Tenth Sovereign.

Furthermore the relics of Guru Gobind Singh also bear verses from the Sri Akal Ustati, this includes the Charaina or armour worn by the Guru at the battle of Bhagani Sahib and also the Guru’s sword. With so much history attached to Guru Gobind Singh’s Sri Akal Ustati, it is important that this issue is not left on the fence and efforts should be taken to read studies by those who have looked at the subject in depth. To start dissecting parts of a composition without understanding the language, structure, and contents of the larger scripture leads to confusion. This pattern of confusion can have serious consequences when people pose as experts, most notable is the excommunicated heretic Ragi Darshan known for his belief that even the Jap Sahib, Chaupai Sahib, and Svaiye are not bani, and that all the verses from Sri Dasam Granth Sahib should be excised from the Sikh tradition.

The Armour of Guru Gobind Singh inscribed with Sri Akal Ustati presently
kept at the Royal House of Patiala. 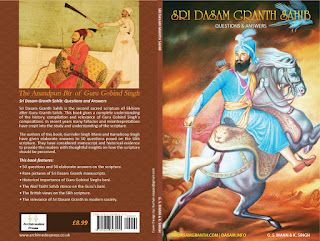