British and the Sikhs: The Akali Nihangs part 1

A Volunteer's Scramble Through Scinde, the Punjab, Hindostan, and the Himalayah Mountains, Hugo James, Published by W. Thacker and co., 1854

Umritsa is likewise famous for its celebrated Seikh temple, which during the Hooli festival is illuminated in a manner that defies any competion. Few people are thoroughly acquainted with the religion professed by the Seikhs. Its founder, Nanuc, intended it to be a pure Deism, but succeeding ages have corrupted his simple creed, which now is converted into a mixture of almost every religion that is known amongst Eastern people. The Grunth is considered their most sacred volume; but since its first appearance the original text has undergone great alterations. With respect to the Seikhs wearing long hair, the custom was introduced by one of the rulers, who considered this an admirable mode whereby the Seikhs could be distinguished from Mussulmen and Hindoos. 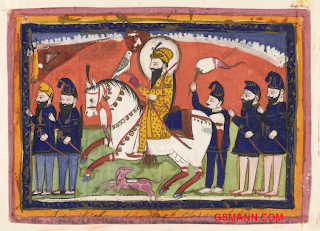 The famous Govind raised the "Akali" sect, who being a favoured class of soldiers, were always ready to maintain their reputation for courage, by being the first to engage whatever enemy appeared in the field against their country. During the late campaigns, the Akalees suffered to a great extent; in fact their daring conduct on one or two occasions, called forth the approbation of the British, who are ever ready to bestow their praise upon the brave, even though they were their antagonists. One of these men singly rushed upon the bayonets of a European regiment, the privates however were unwilling to take advantage of the Akali's temerity, so a strapping grenadier stepped out from the ranks, caught the fanatic by the sword arm, and turning the fellow round quietly, bestowed upon his stern a mild impetus with his toe. The Akalee thus treated, scarcely knew what to think of the matter; but his astonishment must have increased, when he perceived himself permitted to retire without further molestation.

Few religions were so rapid in their rise as that of the Seikhs, although the Mahommedan kings strove their utmost towards smothering the already popular faith. The Inquisition in could scarcely exceed the cruelties practised upon the early Seikhs, who were put to severe torture, unless they abjured their creed. In fact, such hostility was displayed against them, that numbers were forced to flee to the Himilayah mountains, where they might maintain their doctrines without being oppressed. In the present work it would be impossible to enter minutely into the subject; however, if the reader takes any interest in the Seikhs, and their religion, let him peruse " The Rise and Progress of the Seikh Nation."
Akali Nihangs Amritsar British and the Sikhs British India Gurinder Singh Mann Guru Gobind SIngh Guru Granth Sahib Nihangs www.sikhscholar.co.uk