From the Tenth Guru to the reign of Maharaja Ranjit Singh.

Bhai Hardas (Haridas) was a resident of Sur Singh, a large village in the Lahore district (now Taran Taran); he became a close confidant of Guru Gobind Singh. He prepared an early recension of Guru Granth Sahib. This manuscript was dated 1682 AD and completed at Damdama at Anandpur Sahib. This was one of the earliest manuscripts which also contained the saloks of Guru Tegh Bahadur. It was kept at Sikh Reference Library, Manuscript No. 511, with the description, Sri Guru Gobind Singh ji de Likhari Bhai Hardas vali birh.

This manuscript was considered special as it contained the saloks of Guru Tegh Bahadur inserted into the birh not long after Gobind Singh became Guru. The names of the nine Gurus were recorded in the colophon as well the manuscript bearing a  Nishan of Guru Gobind Singh.  It was destroyed in Operation Blue Star in 1984.

Gurbani pothi of Bhai Hardas kept in a private collection.

This also included scribing Dasam Patshah Ka Granth (Sri Dasam Granth Sahib). He was one several likharis who wrote the first recension of the Granth known as the Anandpuri bir. His name appears within this early manuscript.

Interestingly he also fought in the battles with Guru Gobind Singh and Baba Banda Singh Bahadur. He was martyred in the battle of Bajwara (Hoshiarpur) in 1715 AD.

Bhai Hardas had one son and his name was Bhagwan Singh. He was very knowledgeable in the Sikh scriptures and became known as a Gyani. He had five sons and they were Jai Singh, Khusal Singh, Mali Singh, Tara Singh and the legendary warrior Jassa Singh Ramgharia. 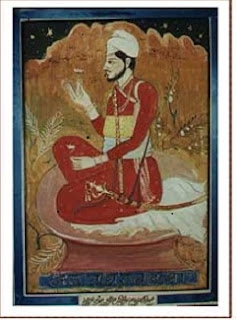 A painting of Jassa Singh Ramgharia said to have been commissioned by the British.

Jassa Singh Ramgharia born in 1723 AD became head of the Ramgharia Misl which formed part of the Taruna Dal. He fought many battles against and with the Mughals. He also created many defences and forts. In 1783 together with Baba Baghel Singh and Gurdit Singh entered Delhi and occupied the Red fort. As a symbol of Sikh sovereignty he brought back a sil or (platform) from the Red fort. This sil was once part of the Mughals own platform and where their rulers once sat. This is placed at the Ramgharia Bungas, within the precincts of the Harimandir Sahib. The recitation of Guru Granth Sahib used to take place over this platform but was later stopped. The Ramgharia Bungas are in urgent need of restoration. 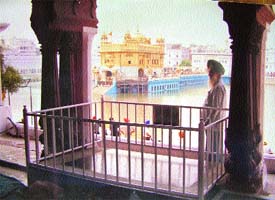 The Sil or platform taken from the Mughal Court and now at Ramgharia Bunga.

Like his grandfather, Jassa Singh Ramgharia lived his life as a brave soldier of the Khalsa Panth and died in 1803 AD. Jassa Singh was true Khalsa and was a contemporary of Guru Gobind Singh’s Khalsa and lived to see the beginnings of Maharajah Ranjit Singh’s conquests.