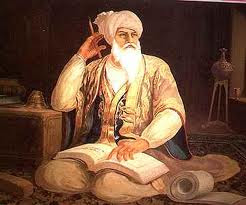 This week sees the launch of a brand new website: www.bhainandlal.com  promoting the virtues and history of Bhai Nand Lal Goya. The Kavi (poet) was a great scholar of Persian. The Kavi has been praised throughout Sikh history and been given the title: poet laureate of Guru Gobind Singh' Durbar.

The bani/poetry of Bhai Nand Lal has been approved for recital in Gurdwaras as stated in the Sikh Rehat Maryada. This follows Guru Granth Sahib and Sri Dasam Granth Sahib.

Bhai Nand Lal was in the retinue of Emperor Aurangzeb and eventually left his arena to work in a more conducive atmosphere. The poetic arenas of Anandpur Sahib and Paonta Sahib became an epicentre of Indic and spiritual thought.

According to Guru Kian Sakhian ( Stories of the Guru[s]), the Guru commanded to all the sangats, ' Any Sikh who will present himself in the Durbar with some good book, healthy horse, and armaments will earn our pleasure.

This was a calling for warriors, merchants and also for the poets to converge at the Guru's Durbar.

Sri Amrit Rai. Tekhan, Ani Rai, Alam et al, also came there and presented themselves in  the Durbar of the poets. Apart from that, Guru Jee himself was an adept poet and the poetical Symposia ensued everyday.  At Anandpur,  Guru Jee had already began writing, ' Krishna Avatar.'

Chak Nanki, along with the congregation from Multan. Goya presented his handwritten book called Bandgi Naama (Epistle of worship) and another written by Hirda Ram Bhalla called play of Hanuman was presented to Guru jee as well.

Satguru jee was very much gratified at Bandgi Naama, the creation of Bhai Nand Lal.....Guru jee explicated,  'Your composition enchants the heart and rejuvenates the life. From now on it should be given the name of Epistle of life. It will be revered as much as our creations [Gurbani].

Bhai Nand Lal as a result wrote several compositions which have been played a significant part in the understanding not only of the Tenth Guru but the poetic nature prevalent at the Durbar. He also played a significant part in the promotion of Langars and was a confidant of the Queens of the Khalsa at Delhi after the ascension of the Tenth Guru. It is refreshing to see a website which covers such superb eclectic compositions of Bhai Nand Lal and the Turiya Charity is commended for bringing the works of Bhai Nand Lal to the wider public.

I was approached by the Turiya Charity to contribute an article to the site last year. My essay is entitled The Kavi Durbar of Guru Gobind Singh. This essay covers some of the Court poets of the Tenth Guru.

I also comment on some rare manuscripts of Sikh history including the Sarabloh Granth(Granth of All-steel), Das Gur Katha (Story of the Ten Gurus) and the manuscript of Tankhanama or Nashitnama (manual of instructions) attributed to Bhai Nand Lal.

You can see my article at http://bhainandlal.com/ebooks/kavidurbar.pdf