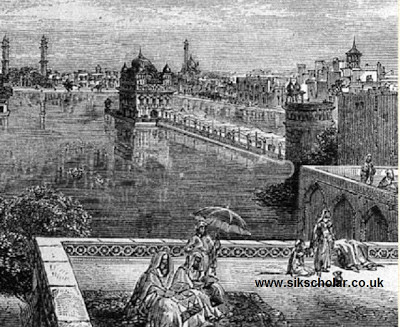 An old engraving showing Granthis reciting from two Granths: this is similar to the painting created by August Schoefft.


After discussing the important of Shastars at the Sri Akal Takht Sahib (See: The Throne of Akal and the Holy relics of the Khalsa). The importance and discussion of the Granth of Akal (Sri Dasam Granth Sahib) is not only warranted but is also a necessity.

Guru Gobind Singh's stay at various locations in the Panjab showed his majestic and regal presence. His poetic talents were carved and nurtured at Anandpur, Paonta and even Bhabour Sahib The creation and compilation of his bani was the continuation of the thought processes by the previous Guru's. Whilst Gurbani within Pothi Sahib had guided the Sikhs for many years, Guru Gobind Singh supplemented the Shant ras bani with his own Bir ras bani.

Just like the Harimandir Sahib which reflected the piri side of the Sikhs, the Sri Akal Takht Sahib represented the miri. The bani of Guru Gobind Singh represented the case for Sant to become Siphai. The bani was the blueprint for Sikhs to become Khalsa. In the Guru's Krishna Avatar he writes on the strengths and virtues of one Kharag Singh, this description is not a mere adventure in his poetic expression but a prediction of the wars and battles the Khalsa will fight. The Khalsa would need to be like Kharag Singh: victorious in mind and battle.

Bhai Mani Singh was given the task of ensuring Gurbani was properly understood in Amritsar. One early manuscript of the Guru's bani is referred to as the Anandpuri bir-reflecting the bir's creation at Anandpur, another bir(s) which are at Takht Patna Sahib-reflect how manuscript copies were sent there, the same case can be made for Damdama Sahib. At Takht Hazur Sahib, manuscripts were taken there, when the Guru and his Khalsa journeyed there.


On the seat of Guruship is Guru Granth Sahib and next to it is placed the Tenth Guru’s Granth Sahib hence it can be ascertained that it is orated by the Guru.

It was during my recent visit to the Sri Akal Takht Sahib that i met with the head Granthi of the Takht: Giani Gurmukh Singh. He invited me to discuss my research on the Guru Gobind Singh' bani after giving permission to look at the Shastars of the Khalsa. He immediately without hesitation stated that Sri Dasam Granth Sahib was the Granth of Guru Gobind Singh. I was especially pleased with Giani ji as he realised that the Internet was important aspect to understand and promote Sikhi. He stated there should be more internet resources on Sri Dasam Granth Sahib. 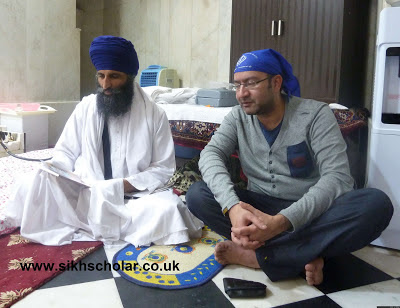 I also explained to Giani Ji how Guru Gobind Singh ensured that his bani was proliferated on to objects like his Shastars, coins and other material heritage. Again he was appreciative of my research in this area. I presented Gyan ji with a copy of my book Sri Dasam Granth Sahib: Questions and Answers. Giani ji was pleased to hear of the evidence collected within the book and thanked me for taking on this important subject. 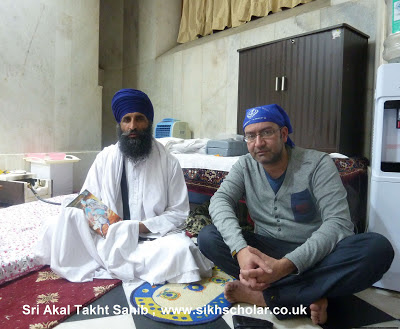 The book Sri Dasam Granth Sahib Questions and Answers can be obtained from www.archimedespress.co.uk  for Western readers and from JSKS: for the Eastern market.