The Granth of Guru Gobind Singh: A historical journey through rare manuscripts and relics of the Khalsa (The Legacy of the Khalsa 2013) 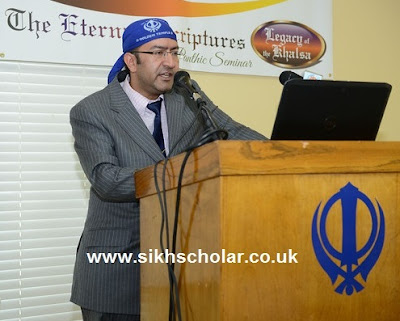 Sri Guru Granth Sahib or Adi Granth is seen as the primal scripture of the Sikhs containing the bani or compositions of several Gurus. The Sri Dasam Granth Sahib also referred to as Dasven Patshah Ka Granth; (the scripture of the Tenth King) is the secondary scripture of the Sikhs. The name of the Granth is associated with the Tenth Guru: Guru Gobind Singh. The compositions of which form part of several Khalsa ceremonies and rituals.  The compositions from the scripture together with compositions from the Guru Granth Sahib have been employed in the Nitnem (daily liturgy), the Amrit Sanchar (Khalsa initiation) and other ceremonies and rituals. The Ardas or petition is recited before and after every Sikh ceremony and is partly derived from the Dasam Granth composition Chandi Di Var (ballad of Chandi).  The Dasam Granth also serves as a primary scripture in Sikh practices namely the art of Shastarvidyia (the science of weapons).

The compilation of Dasam Granth was a ground breaking moment by Guru Gobind Singh, essentially this was the same time he was finalising the Guru Granth Sahib. His compositions written in the Braj Bhasha became predominant at the first Amrit Sanchar at the traditionally accepted time of 1699. The Guru Granth Sahib and Dasam Granth became the scriptures which have served the Khalsa panth since this time. The compilation and creation of Guru Gobind Singh’s Granth has been associated with several Sikhs namely Bhai Mani Singh. However Mann in his presentation sheds light on the role of Hazuri Likhari: Bhai Haridas (Grandfather of Jassa Singh Ramgharia) and Bhai Shia Singh (resident within the court of Mata Sundri). The presentation will consider some rare manuscripts of Sri Dasam Granth Sahib. This includes the Anandpuri bir, Bhai Mani Singh bir and also the Bhai Daya Singh Aurangabad bir. Mann will also show that there are still a number of Dasam pothis that are associated with the Guru Gobind Singh and these will be discussed as well.

Whilst the transmission of the bani of Guru Gobind Singh is normally considered by assessing manuscripts, Mann argues that the holy relics of the Khalsa have been neglected on the discourse of Dasam Granth. At the same time the manuscripts were created, the bani was also transmitted by transcribing it on material items. This included armour, swords and even copper plates. Mann shows the significance of these relics for not only understanding the history of Dasam Granth Sahib but for also understanding the history of Sikhism. The inscribing of bani onto these material objects shows the wider purpose of the Guru’s message. The importance of the Ardas and how it was made more prevalent by inscribing it onto a copper plate (for temple custodians) sheds new light on how Hukumnamas (letters of command) were presented. The invocations from the Granth are also discussed and how these were also inscribed on the swords of the Tenth Guru.

The historical reflections of the Granth would not be complete with a consideration of how the British viewed the Scripture. Mann considers the first English translation of Sri Bachitra Natak by Dr John Leyden from the early 1800s. These translations were accurate at the time of transcribing. The significance and importance of this work predates that of Ernest Trumpp (1828 – 1885) and Max McAuliffe (1841 − 1913).  The translation of Sikh Scriptures by the British was a muddled exercise and a misguided one at best. Using some rare documents, Mann shows the complexities faced by the British in the translation of both scriptures. Trumpp was unable to comprehend the in-depth messages within the Granth of Guru Gobind Singh. He later abandoned his translation exercise as did the British hierarchy.

The presentation will also highlight some important facts of how the Prakash of Sri Dasam Granth has been viewed in Sikh history. Whilst some people view the placing of Guru Granth Sahib together with Sri Dasam Granth as an anomaly, Mann will highlight how the maryada at Amritsar and Nanden followed a similar pattern. This sheds important new information on placing both scriptures side by side. The presentation by Mann shows how the Sikh Scriptures have always been part of the Sikh psyche. In recent times the importance and reverence that has been given to Dasam Granth seems to have been neglected and even questioned. The presentation by Mann will show how after a discussion of historical manuscripts and relics these doubts are unfounded. Many important facts in the presentation will be discussed and presented for the first time.

Video of the presentation at San Jose Gurdwara, California, USA.