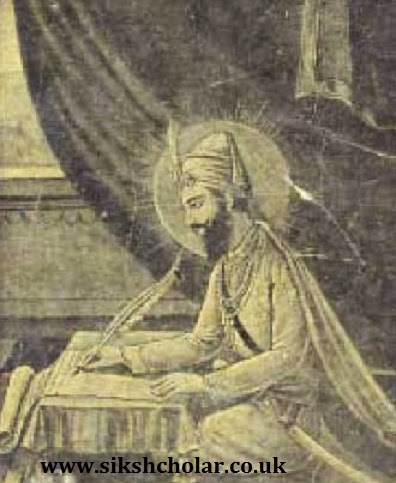 The account below describes gives one reason why Guru Gobind Singh composed bani and created a new Granth Sahib. I have footnoted the account to provide depth and clarity to the description.


One day, Govind Singh took a fancy that he would send for the book of the Granth Sahib,[i] and write something more in it; but as, at that time, that' book was in the house of the Sodhis of Kartarpur,[ii] they would not give it to Govind Singh; moreover, they said thus : " As Govind Singh also calls himself the Gurii, let him, by his own power, make another new Granthji."

When the Guru heard that they would not give the book, then, after a few days, the Guru discovered that, from reading the original Granthji, the Sikhs became very feeble hearted[iii]; he therefore determined himself to compose such a Granth, that, from reading it, his disciples, having learnt the science of government and the use of weapons, and other kinds of expertness, should become fit for fighting.[iv]

Accordingly, from that very day, he commenced to make a very large Granth, and when it was finished in the year 1753 B.B. on the eighth of the light half of the month Bhadon, on a Sunday, then he called its name " The Granth Sahib of the tenth Guru."[v]

This Granth is very difficult, and is composed in many measures in the Hindi dialect, and in it there are many counsels from the Sastras on the manner of giving battle and making war, and about the wiles of women and their arts, and about devotion and the knowledge of God.[vi]

From it, it appears that Govind Singh was very expert in making poetry.

[i] Guru Granth Sahib. Reference here is to adding Guru Tegh Bahadur’s bani to Pothi Sahib.
[ii] Dhir Mal, the son of Baba Gurditta and grandson of Guru Hargobind Sahib.
[iii] The essence of Shant Ras had to be combined with Bir Ras to make the Khalsa complete.
[iv] The Granth of Guru Gobind Singh would incorporate subjects pertaining to Rajniti (political rule) and Shastravidyia (science of weapons).
[v] The name Dasam Patshah Ka Granth is the original name of Guru Gobind Singh’s writings the modern name Dasam Granth was introduced in the nineteenth century.
[vi] The compositions of Chandi, Shastra Nam Mala and Charitropakhyan. The translation of Charitropakhyan as the ‘Wiles of Women’ is incorrect. The composition has descriptions of both men and women.