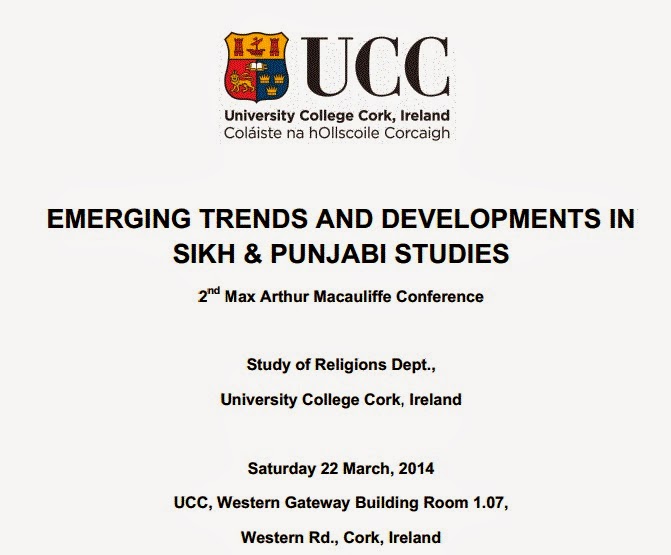 
Following on from last year’s successful ‘Representing Sikhism’ conference held to mark the centenary of Max Arthur Macauliffe’s death, this year’s Macauliffe conference at UCC aims to highlight the most recent and emerging trends and developments in Sikh & Punjabi Studies, seeking contributions in particular from early-career academics, postdocs and advanced PhD students, but also from any scholar whose work promises to break new ground in Sikh & Punjabi studies.

Featuring a paper on Sikh translations by Gurinder Singh Mann considering the the Western interpretations of Sikh Scriptures pre colonial era to the British Raj period in the Panjab.


Translating the Sikh: An assessment of the works of Leyden, Trumpp and Macauliffe.

At the turn of the nineteenth century the British began to expand their colonial designs to encompass the Punjab. To further their interests they took to understanding the Sikh people. Translating Sikh texts would aid in understanding the religious precepts of this hard worthy race of people. This paper considers how the British looked at translating Sikh texts over a period of a century.  We start with the relatively unknown Dr John Leyden (1775-1811), who undertook complete translations of texts like the Bachitra Natak (wondrous drama) and the Prem Sumarag Granth (true path to love). We consider the project to translate the Sikh scriptures by the German philologist Ernest Trumpp (1828-1885). The paper also looks at the contribution made by Max Arthur Macauliffe (1841-1913) in his magnus opus, The Sikh Religion in 4 volumes. The translations can be assessed by comparing the pre-colonial and colonial views of Sikh works.

Register for the Sikh Conference.

More information can be found on the University College, Cork Website.