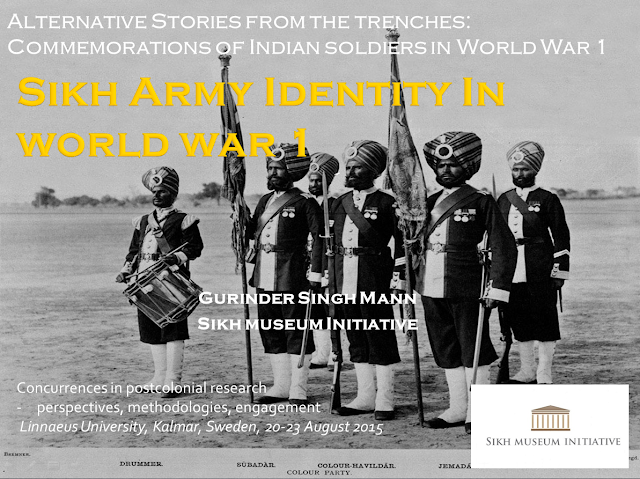 It was during the Anglo-Sikh Wars of (1845–1846) and (1848–1849) where the British witnessed the bravery of the Sikhs. Whilst the Punjab was annexed and the British became the new rulers they realised that a new Sikh identity could be forged which could accommodate these soldiers within the British army.

Whilst keeping some traits and traditions of mainstream Sikhism, the British promoted the notion of a ‘martial races ‘theory. This paper considers the factors that led to the Sikhs becoming a part of a foreign army during World War 1 and would later fight in faraway places.

The paper will also consider the different regalia, Insignias and weapons which were retained by the Sikhs. The different regiments also had a Sikh Granthi or priest attached to it. This ensured Sikhs had access to their scripture: Guru Granth Sahib. Interestingly miniature scriptures were also created for the Sikhs which were small enough to be carried into battle. All these factors appeased and created conditions for a robust fighting force which the British required for the global war effort. In essence the Sikhs similar to the British shared an ethos of rooting out tyranny and creating an atmosphere of righteousness.