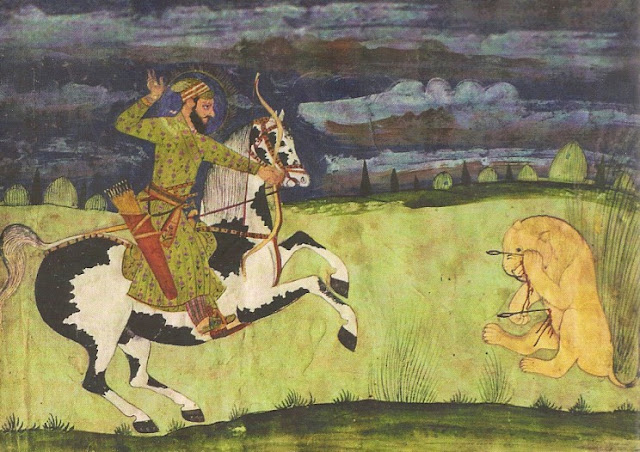 A portrait of the Tenth Guru hunting from the ‘Anandpuri’ recension of Dasam Granth from 1696 AD. © Joginder Singh Ahluwalia

The scripture known as the Dasam Granth Sahib or the ‘Scripture of the Tenth King,’ has traditionally been attributed to Guru Gobind Singh. It was composed in a volatile period to inspire the Sikh warriors in the battle against the Moghuls, and many of the compositions were written for the rituals related to the preparation for war (Shastra puja) and for the battlefield. The verses generally consist of battle scenes and equate weapons with God, where the sword symbolises the victory of good over evil. War, according to the Tenth Guru, should only be a righteous war or dharam yudh, and it is true that the Sikhs throughout their history have been noted for their exemplary ethics in warfare. Guru Gobind Singh writes in his epic letter known as the Zafarnama that it is only justified to ‘raise the sword once all means have been exhausted.’ The compositions were written in mostly Braj Bhasha, and some smaller compositions are composed in Persian and Punjabi. In contrast to the primary Sikh scripture, the Adi Guru Granth Sahib, which is written in Shanti ras or verses that inspire peace, the Dasam Granth has a heroic strain of expression or Vir ras.

In recent times, the Dasam Granth has been of much interest and volatile debate. This debate has its roots during colonialism in the Sikh reformist movement, known as the Singh Sabha. The most controversial and volatile discussion is that of the authorship, which is the most polemic and opinionated argu­ment that one could ever experience. Rather than being concerned with this issue of authorship, it is better that discussions are based on primary sources, like manuscripts and relics.
There is an intrinsic relationship of the scripture to the maryada (traditions), which includes the shastras (weapons), the Takhts (thrones of polity), and the warriors known as the Akali Nihangs. It is important to consider the historical context that the scripture was written in, and its link with battlefield sciences of the period. Whilst the primary scripture is now predominantly seen in Gurdwaras or Sikh temples across the world, during colonialism the Dasam Granth was removed from its ceremonial role, and it actual contents have been overshadowed by the rhetoric of reformist movements. 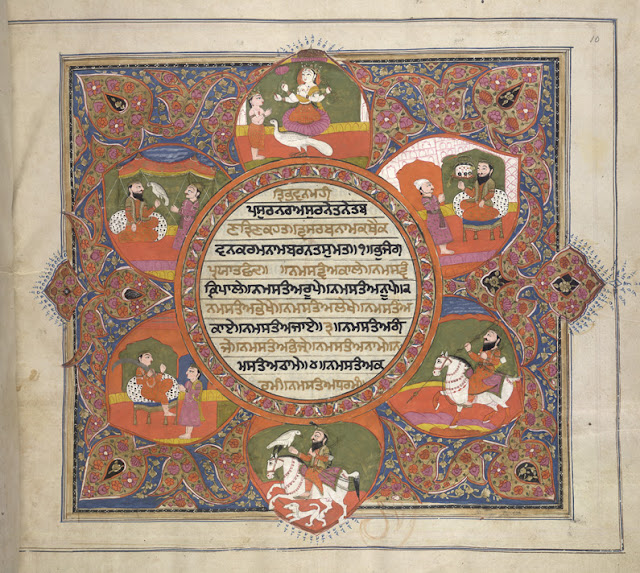 Illuminated frontispiece of the Dasam Granth, Or. 6298 © The British Library Board
The Sikh warriors practised a martial art known as Shastarvidia and the weapons of choice were the Kirpan and Khanda. The Khanda, or the double edged sword, is also employed in the Sikh initiation ceremony of Khande ki pahul. The sacred ambrosial water is stirred with a Khanda while verses from both scriptures are recited. The initiate drinks the sacred water, and joins the Khalsa or the fraternity of the pure. This new born Khalsa would follow kshatriya ideals and thus be a saint soldier. The Tenth Guru institutionalised both the scripture and the community as the Guru (Granth and the Panth), which put an end to human Guruship. His leadership gave birth to the Sikh Commonwealth or Misals who fought against the Moghals in the eighteenth century.
During and after initiation a Sikh is required to wear the 5 K's, emblems which start with the letter K, notably the Kesh - long and uncut hair, the Kacchhera - long breeches, the Kirpan - sword, Kangha - comb, and the kara - steel bracelet to be worn around the wrist. In the so-called apocryphal compositions of the Dasam Granth, these emblems are recorded in the composition Nishan-i-Sikhi or ‘Emblems of the Sikhs.’ The composition Rag Asa, defines a Sikh warrior as one who wields the sword and keeps their hair uncut, ‘it is my strict order you should keep kesh and glisten like form of the sword’. This composition is only found in some of the oldest manuscripts of the Dasam Granth:
nishān i sikhī īṁ paṁja haraph i kāph.
These five letters beginning with K are the emblems of Sikhism.
hargez nabāshad azīṁ paṁaz muāph.
A Sikh can never ever be excused from the great five Ks.
kaṛā kārd o kac-cha kaṁghā bidāṅ.
The Bangle, Sword, Shorts and a Comb.
bilā kesa hec ast jumalā nishān.
Without unshorn Hair the other lot of symbols are of no significance.
The Granth of Guru Gobind Singh: Essays, Lectures and Translations (OUP, 2015), pp. 61-62.
The Dasam Granth contains a composition named Shastra Nam Mala or ‘The Rosary of Weapons.’ The verses weave the reader through the names of various weapons together with a cunning set of riddles. This includes the Chakkar or quoit, which Sikhs would adorn their Turbans with. The Chakkar was thrown in battle which was noted by the British during the Anglo-Sikh Wars in the nineteenth century, as well as in the First World War.

Our recent work explores the Dasam Granth Sahib, and is one of the few published works on the scripture in English.

The Authors
Kamalroop Singh is an independent researcher in Sikh studies and a director of Punjab Cultural Association. He completed his PhD titled Dasam Granth Re-Examined in 2012 at the University of Birmingham. He was the first to construct the textual history of the Dasam Granth Sahib, from which he concluded that it was in fact compiled in the Tenth Guru’s lifetime.

Gurinder Singh Mann is the director of the Sikh Museum Initiative in the UK. He completed his MA in South Asian Religions at De Montfort University, Leicester in 2001. His study titled The Role of the Dasam Granth in Khalsa looked at its various compositions and how they were employed in Sikh practices, for example, the khaṅḍe kī pāhul and their use in the daily liturgical ritual of the nitnem.

Both are co-authors of The Granth ofGuru Gobind Singh: Essays, Lectures and Translations (OUP, 2015).