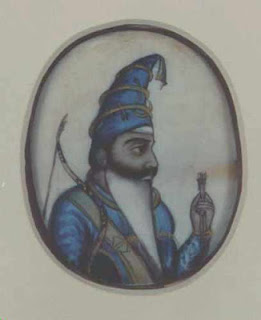 Akali Phula Singh, the head of the Akal Takht and the Akali Nihangs was suspicious of the British and for good reason.


"Whilst Mr. Metcalfe and his escort remained at Amritsar, our Musselman sepoys, not being prohibited it appears, made aTazea for the usual celebration of the Mahurrum, a ceremony interdicted in the Punjab, and held in abhorrence by all the bigoted followers of Guroo Govind. One Phoola Sing, a leader of Acalis, or Immortals, a sort of Knight Templars(1) among the Sikhs, attempted, at the head of his band, to cut up the party in a night attack. Captain Ferguson was severely wounded, and several of the men killed, but the assailants were fairly repulsed and driven into the town. Runjeet Singh made a decent show of regret for this outrage, which it is now believed that he was not accessory to, although at the time many considered it an experiment made at his instigation, to try the mettle of disciplined troops."(2)

This was not the first time that Akali Phula Singh had attacked the British, some years earlier he virtually wiped out a number of british officers who were mapping the Punjab. Akali Phula Singh predicated the British take over the Punjab, Ranjit Singh didn't pay heed nor did the Lahore Durbar. The writing was on the wall during and after the Anglo Sikh Wars and the British made sure the Akali Nihangs were to be eliminated during these wars......