British and the Sikhs: The Akali Nihangs part 2

Sir Lepel Henry Griffin (20 July 1838 – 9 March 1908) was a British administrator and diplomat during the British Raj period in India. He wrote several books related to Panjab and the Sikhs including: The Punjab Chiefs, The Rajas of the Punjab and The Law of Inheritance to Sikh Chieftains.  He also wrote a book on Maharaja Ranjit Singh. An extract regarding the Akali Nihangs is reproduced below.
Griffin, Lepel Henry, Sir, Ranjit Singh and the Sikh Barrier Between Our Growing Empire and Central Asia, Oxford : Clarendon press, 1905.

The Sikh army was known as the Dal Khalsa, the army of God, sometimes the Budha Dal or veteran army. It consisted for the most part of cavalry called Kattiawand, who found their own horses and received a double share of prize money. Each chief, in pro- portion to his means, furnished horses and arms to his retainers who were called Bargirs ; and as the first tribute exacted from a conquered district was horses, the infantry soldier was, after a successful campaign, generally transformed into a trooper. The infantry were considered an inferior branch of the service, and were only used for garrison and sentry duty, and the battles of the Sikhs were invariably cavalry actions. The only infantry who enjoyed any respect were the Akalis. These were a fanatical body of devotees, who dressed in dark blue and wore round their turbans steel quoits, partly for show and partly as weapons, though they were not very effective. 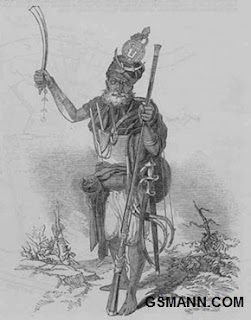 Their other distinctive signs were a knife stuck in the turban, a sword slung round their neck, and a wooden club. These men, excited by hemp, were generally the first to storm a town, and often did excellent service; but they were lawless and uncertain, and, in peaceful times, enjoyed almost boundless license. The Sikh weapon was the sword, with which the cavalry were very skilful. Bows and arrows were used by the infantry, and a few matchlocks; but powder was scarce and its use little liked by the Sikhs, who were never at ease with a musket in their hands. For the same reasons they possessed scarcely any artillery; and although Ranjit Singh, with the aid of French and Italian officers, formed a very powerful and well-appointed artillery, it was, to the last, a branch of the service hated by every true Sikh, and principally filled by Muhammadans.

Also see: British and the Sikhs: The Akali Nihangs part 1.

I shall also be writing on the European Generals of Maharaja Ranjit Singh.