Discourse on the martial scripture 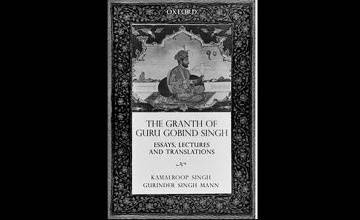 This book is a product of the joint effort of Kamalroop Singh and Gurinder Singh Mann, two U.K. based independent researchers on Sikhism, who have already concerned themselves with the question of the authenticity of the Sri Dasam Granth Sahib in an earlier publication they had co-authored in 2011 (Sri Dasam Granth Sahib : Questions and Answers). Kamalroop is also director of the Punjab Cultural Association in the U.K. while Gurinder Singh Mann is the director of the Sikh Museum initiative in the U.K. Kamalroop had an early engagement with the Dasam Granth in course of his Ph. D. work for the University of Birmingham. This academic interest later blossomed into  full-fledged research. Gurinder Singh Mann’s collection of various relics, weapons and manuscripts went a long way towards substantiating the conclusions reached by Kamalroop from his study of old manuscripts and the early Sikh historical traditions.

Guru Teg Bahadur’s martyrdom in 1675 had drowned the entire Sikh community into a pall of gloom and the responsibility of rescuing the Panth from this crisis fell on his young son Guru Govind Rai. Tradition has it that the Guru roamed in the lakhi jungle on the Naina Devi hills trying to work out strategies to revive the community. He spent a full score of years trying to master the various arts and sciences (Shasters) and engaged a group of Brahmins to train him for the battle of life. Here he experienced the taste of the divine presence of the goddess Chandi , who appeared to him in the form of a khanda (a trident shaped sword) in the midst of a ritual fire. The  Dasam Padshah ka Granth, which was believed to have been authored by Guru Govind, contained this  Chandi di Var. The Sarabloh Granth , which forms part of the Dasam Granth is indispensable in nitnem, Khande ki pahul and Sikh ardas or daily liturgy. The nishani Sikhi, enjoining upon all Sikhs to wear them, were also accepted to be a part of the Dasam Granth.

While administering amrit to a newly initiated Sikh, verses had to be recited from both the Adi Guru Granth Sahib as well as the Dasam Padshah Ka Granth.According to Kamalroop, the Dasam Granth was enthroned in the Akal Takht in the Hari Mandir at Amritsar in the custody of Bhai Mani Singh in 1698, under the orders of Guru Gobind Singh himself, proving beyond doubt that it was authored in his Court at Damdama Taksal in Anandpur Sahib. There is also the myth that while preaching the piri and miri (divine and worldly), Guru Hargovind had predicted that he would author a new Granth embodying a new code of conduct for his community in his tenth incarnation. Guru Teg Bahadur was also known to have touched the ground of Damdama Sahib with his forehead. When his companions asked him what he was doing, his reply was that this was the site of a great temple of the future. The currency of such myths in the Sikh community point to the importance attached to the contents of the martial book going under the name of Dasam Padshah Ki Granth.

The honoured position of the Dasam Granth continued under Maharaja Ranjit Singh and both the Dasam Granth as well as the Adi Granth were carried by his armies during battles and verses were recited to the soldiers by the Granthis during evening when the armies were at leisure.   The fall of the Dasam Granth from favour and the attempt to relegate it to a position of apocryphal literature not authored by Guru Gobind, but by his associates like Bhai Mani Singh, Dip Singh or Bhai Nand Lal were later day attempts.

Gurinder Singh Mann and Kamalroop Singh have tried to argue that this devaluation of the DG occurred only after the disarmament of the Khalsa by the English after the unfortunate Anglo-Sikh Wars of 1849, where the Khalsa had been betrayed by the  purbiahs. Christian missionaries thereafter swarmed like flies in the former Kingdom of Maharaja Ranjit Singh. They appreciated the monotheism of the Adi Granth but disapproved of the frequent references to the manifestations of the powers of Hindu Gods and Goddesses in the Dasam Granth. They therefore tried to purge the beliefs and customs associated with the Dasam Granth from the Sikh belief system. Under their influence the Singh Sabha intellectuals began to doubt the authenticity of the Dasam Granth.  Finally in the 1940s they succeeded in throwing it out from the Akal Takht along with other survivals of the Hindu antecedents of the Sikhs.

The controversy over the Dasam Granth continued to haunt Sikh theological discourse even in recent years. There was a  hukmnamah  from the Akal Takht on 14  May 2000, which was reiterated on 7  August 2000 by Jathedar Joginder Singh Vedanti forbidding the diaspora to engage in the debate on the Dasam Granth. The edict was reversed in 2006 asking scholars to give befitting replies to those individuals who doubted the teachings of the Dasam Granth. This was repeated once again in 2013.

Expatiating on the necessity of writing a second Granth Bhai Mani Singh had written that ‘the martial scripture (Dasam Granth ) was written so the ones who grasp the scripture of devotion (Adi Granth ) can also engage in war. They are to read the martial Isotar (Asatotra ) of the Devi (Chandi ) and they will thus be aided in the wielding of the weapons.’ Kamalroop has added extensive translations of the relevant passages in the Dasam Granth to illustrate his point. The Sri Bhagauti Asatotra , for instance, goes:

The Dasam Granth had been removed from the precincts of the Harimandir Sahib but it was kept in the Akali Phula Singh Burj close by. The Patna Sahib and the Hazur Sahib also contained two recensions of the Dasam Granth. While stressing the necessity of the Khalsa rahitname and the  nishani Sikhi and the recitation of verses from the sarabloh during the administration of amrit,  the Singh Sabha reformers and the SGPC were involved in the peculiar contradiction of decrying the idolatrous associations in the verses of the Dasam Granth.