Gyani Sher Singh Nihang is based at Ambala in the Panjab. Gyani ji’s katha has been heard throughout the Panjab and beyond. He has been vocal together with many other Kathavaks and scholars on the subject of Guru Gobind Singh’s bani or Sri Dasam Granth Sahib.

It was indeed a pleasure to meet such a distinguished and respectable Singh. I met Gyani Ji at the house of Dr Harbhajan Singh in Patiala. Dr Singh is a Sikh scholar who is based at Dehradun, part of Panjabi University Patiala. (See link here)
We discussed several issues: including people who causing doubt on the banis of the Khalsa. We were of the opinion that the many of the people who creating these doubts were the same people who did not understand Guru Granth Sahib.
Gyani ji stated that those doubters would remain to be so and as a result we should impart knowledge on those who were unsure of how and when the bani of Guru Gobind Singh was imparted. We should also focus on the the Guru’s compositions. As a result Gyani ji was happy to learn of my research on Sri Dasam Granth Sahib, he was impressed with the research undertaken related to the British sources and early manuscripts. He stated that my recent book( Sri Dasam Granth Sahib: Questions and Answers) was important to ensure that the Granth of the Khalsa was better understood.
We discussed the importance of Akali Phula Singh’s role not only as an Akali but his opposition to the British. He mentioned that the name of the Nihangs had been whitewashed out of Punjab history especially at Gurdwara Dukh Niwaran. He was referring to the role played by Akali Baba Hanuman Singh in the Anglo-Sikh wars and the how the British chased the Akalis all over Punjab and the massacre that ensued at Patiala.
I discussed my new book on Akali Phula Singh with Gyani Ji. He was impressed with the sources that were used in the book. This included how the British were advanced in their steps of taking over the Punjab.[i]I then progressed to explain to Gyani ji how relics of the Khalsa were taken to the UK, he was surprised to learn of the manuscripts and other relics in the UK.  The Akali Phula Singh bookwill be released soon. 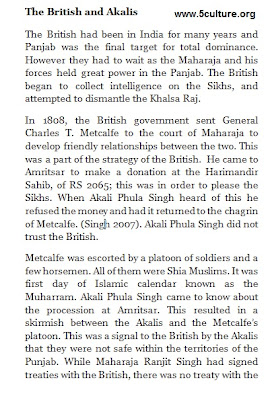 Transcript of Akali Phula Singh book coming soon.
Gyani ji also spoke about the Singh Sabha reformers and how they plotted against Baba Sahib Singh Kaladhari. He described the battle that took place between the Nihangs and the reformers at Sri Akal Takht Sahib in 1920. This event that has been causing me considerable pain as to how/why the Granth of Guru Gobind Singh could overnight be displaced. I have considered the numerous accounts related to this event (Including the views of the reformers and the Nihangs accounts) and these finding will be published in another forthcoming publication.
Dr Harbhajan Singh started discussing the importance of Guru Nanak’s bani: Sidh Ghosht. This was very interesting as on the same day Dr Jodh Singh had told me about his new book on the Subject. ( Dr Jodh Singh undertook his doctoral thesis at Benares University on Sidh Ghosht). Both Gyani ji and Dr Singh stated that they wanted to consider the importance of this composition. 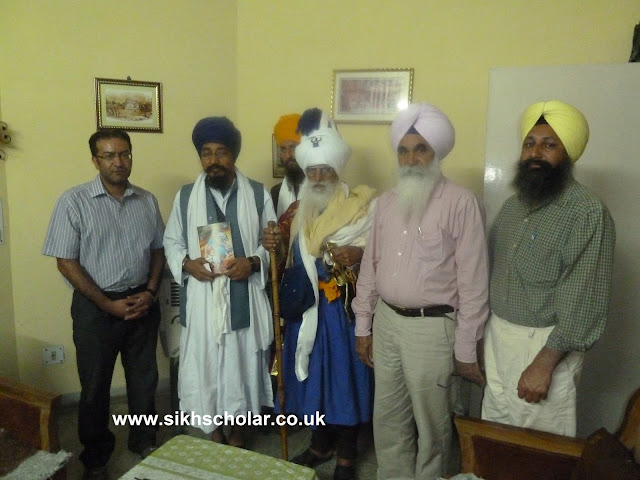 Gurinder Singh Mann with Gyani Sher Singh and Dr Harbhajan Singh and Dr Kashmir Singh
As Gyani ji was leaving we started discussing rare manuscripts and i pointed Gyani ji to where he could find some rare manuscripts of Guru Gobind Singh. He was pleased with this gesture and stated that he is hoping to come to the UK in the near future. 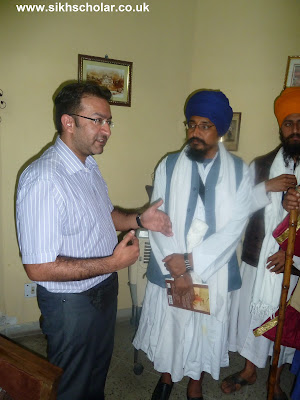 Rare manuscripts of Guru Gobind Singh discussed with Gyani Sher Singh
What people seem to forget is that the Nihangs were the ones who looked after Gurdwaras and kept the maryada of the Khalsa. This is what i wrote about in my MA thesis in 2001. This has not changed, it is only people’s perception of what the Nihangs represent today. Gyani Ji is a scholar of the Akali Nihangs and they will always be guardians of the maryada and scholars like me will protect Guru Gobind Singh’s scriptures.
Akal Sahai
Gurinder Singh Mann
[i] An area which has been neglected by scholars, my personal research shows that the British bid their time in conquering the Panjab. Whilst they made treaties with Maharaja Ranjit Singh, it was only the Akali Phula Singh who had the foresight to see the designs of the British.

The book Sri Dasam Granth Sahib Questions and Answers can be obtained fromwww.archimedespress.co.uk for Western readers and from JSKS:  for the Eastern market.