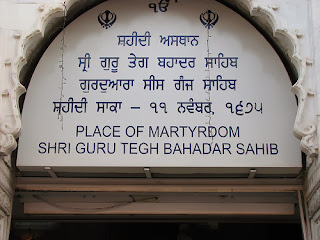 Sign at Gurdwara Sis Ganj, the site where Guru Tegh Bahadur met his martyrdom. The Gurdwara was built by Baba Baghel Singh, conqueror of Delhi.

The departure of Guru Tegh Bahadur gave a rude shock to the Sikhs who started bewailing.

He was God’s own image while living. After leaving his body, he merged with the Lord.

He who mourns his death, is mistaken.” This consoled the Sikhs.

The Guru explained, “It was necessary to expose the falsehood of the Turks, which has been done.