LEGACY OF THE KHALSA: THE ETERNAL SCRIPTURES 2013 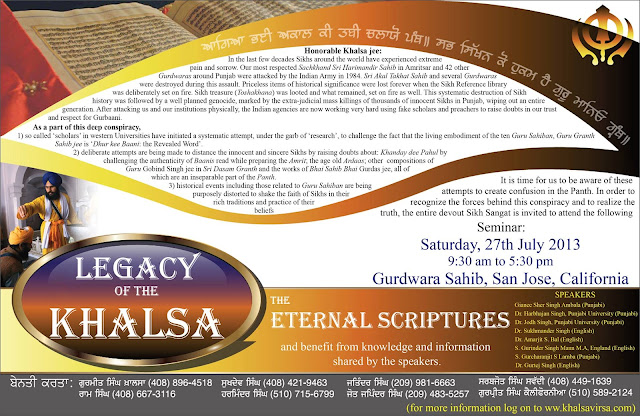 I will be undertaking a lecture on the history of Sri Dasam Granth Sahib, i will be covering some rare relics and history related to the Granth of the Khalsa. As a researcher on Guru Gobind Singh’s bani for over 16 years i will showcase some anecdotes that reveal how the bani of Guru Gobind Singh has guided the Sikhs for over 300 years.

The conference aims to address  the imbalance created by scholars and pseudo scholars on the status and importance of the Sikh Scriptures. As a result the Conference intends to address the following:

1) so called ‘scholars’ in western Universities have initiated a systematic attempt, under the garb of ‘research,’ to challenge the fact that the living embodiment of the ten Guru Sahiban, Sri Guru Granth Sahib jee is ‘Dhur kee Baani: the Revealed Word’.

2) deliberate attempts are being made to distance the innocent and sincere Sikhs by raising doubts about:
Khanday dee Pahul by challenging the authenticity of Banis read while preparing the Amrit, the age old Ardaas, other compositions of Guru Gobind Singh jee in Sri Dasam Granth and the works of Bhai Sahib Bhai Gurdas jee, all of which are an inseparable part of the Panth.

3) historical events including those related to Guru Sahiban are being purposely distorted to shake the faith of Sikhs in their rich traditions and practice of the faith.

Video promotion of the event: