The project by the Sikh Museum Initiative (SMI) focused on the Anglo Sikh Wars which took place in India and Pakistan between 1845 and 1849. It was the first major project in the UK which considered the British and Sikh perspectives on this important chapter of Anglo Sikh history. We undertook an in-depth programme of researching and documenting artefacts and relics held at museums in the UK. This included collaborate working with Regimental Museums as well as the more famous ones. Our volunteers and core team ensured that the project was a great learning and engaging experience.

These museums held information and commemorated the Anglo Sikh Wars independently but were less known to the Sikh community or to the wider public. We researched images and paintings held in larger institutions as well including the Victoria and Albert Museum, British Library, National Army Museum, Royal Collection etc.  The Anglo Sikh Wars exhibition took place between 11th March and 4th June 2017 at the Newarke Houses Museum, Leicester. There were 38 objects on display including 12 portraits. Many of the objects were from the actual battlefield of the wars. The museum is part of Leicester City Council’s Museum service.  The location was central in terms of proximity to the town centre together with it being opposite De-Montfort University, Leicester.  The exhibition was aided with 6 lectures undertaken by experts in the field. This was together with 3 arts and crafts activities which allowed us to demonstrate how 3d printing can be utilised to share and understand heritage.

We also incorporated  3D technology and augmented reality to recreate lost heritage related to the Anglo Sikh Wars. The touchscreen monitor (as used in the King Richard III exhibition) was manipulated to showcase 6 objects including the Kohinoor Diamond, a Brown Bess and other relics. 4 of these objects were used in the augmented reality display which let visitors see the exhibits on a large screen. This was the first-time Sikh objects were digitised, recreated and brought to life.

The exhibition resulted in 12,318 visitors seeing the displays. There was also a parallel exhibition held at the University of Leicester during the same time which showcased pages from the Illustrated London News from the time of the wars. The Special collections department in The David Wilson Library hosted the display.

We engaged with local communities and ensured that the project reached not only the Sikh community but the wider public in general. The project was featured on the BBC, ITV, several Sikh Channels (Sikh Channel, KTV, Akaal Channel), as well as several BBC radio programmes and Demon FM (Local station). The project was also filmed for the Antiques Roadtrip programme (BBC 2). The media coverage was also prevalent in print and online media with coverage in Leicester Mercury, Shropshire Times and in India with it was featured in the Hindustan Times and Tribune India. The project was reviewed by Punjab 2000, Nerd Singh and student Journalists (De Montfort University). Social media was also used to promote the project and many pages shared our posts and videos increasing our reach to a greater audience.

The project was then taken on the road with the Anglo Sikh wars pop up exhibition created to reach communities which could not see the exhibition at Newarke Houses Museum. We created a programme of events and undertook lectures, community activities which meant that the Anglo Sikh Wars pop up exhibition was exhibited at Gurdwaras, a shopping centre, football club, a book launch, academic research conferences as well as Medal Society Convention. As a result, we undertook 39 engagement sessions across the UK where the project was seen or discussed for the duration of the project. His H.R. H the Prince of Wales visited Leicester and in a British army engagement day was also made aware of the project.

The project has helped formulate a better understanding of the battles and enrich both communities in terms of understanding each community better. We feel people of all ages were able to see the project in a multitude of ways.  As a result, we feel the project was seen by over several million people through the various channels at our disposal.

In 2018 the village of Aliwal, Punjab gave the Sikh Museum Initiative an award for the Anglo Sikh Wars project. More details here 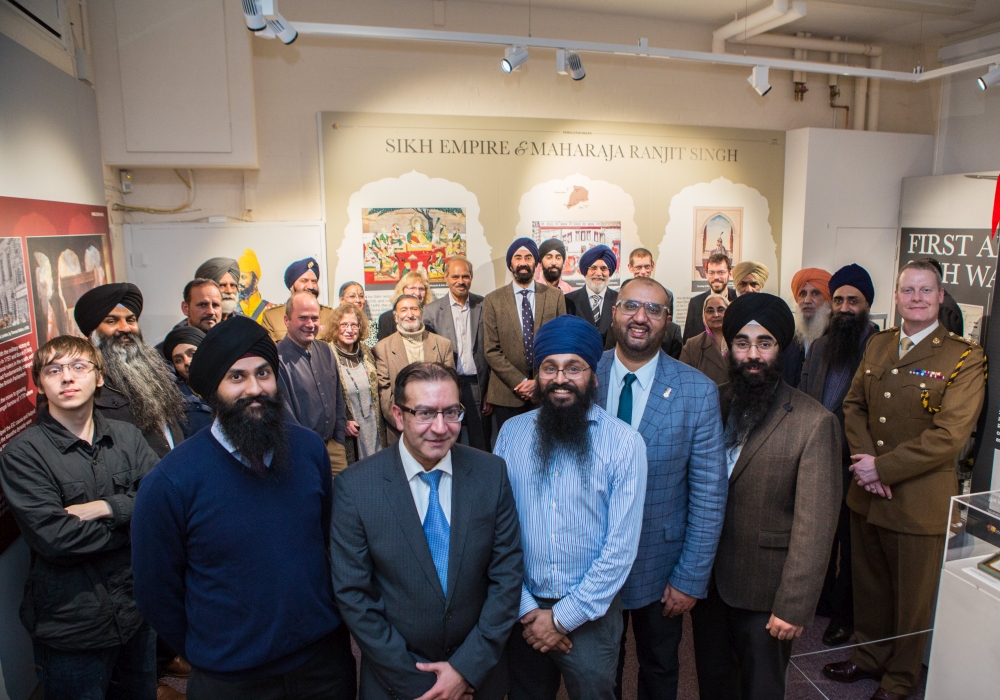