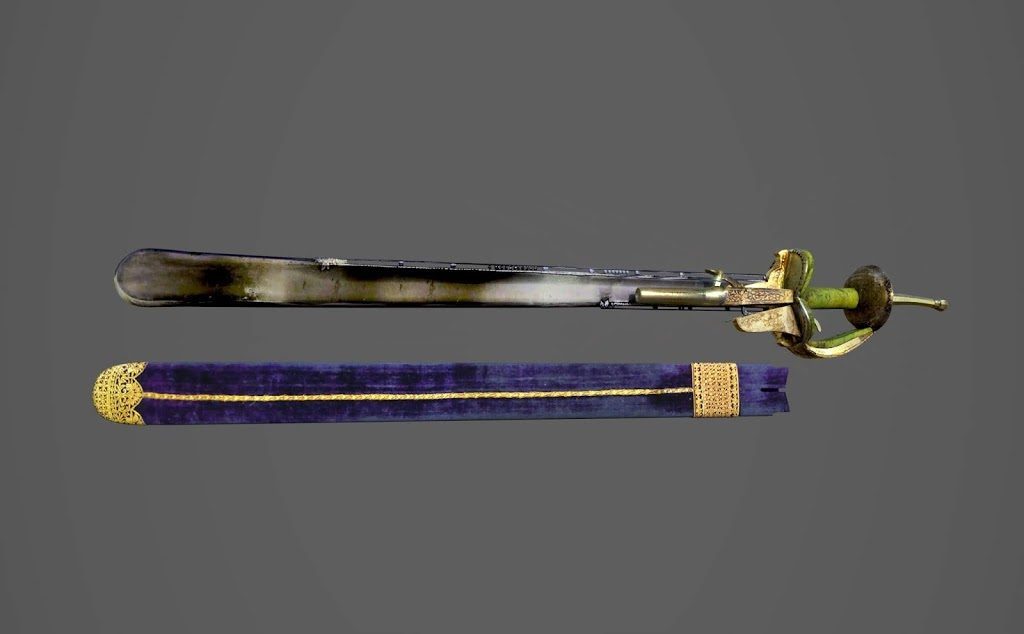 This sword referred to as a Khanda is characterised by a basket hilt and a  double-edged blade. Whilst traditionally associated with the Sikhs the Khanda has its origins in Orissa and was adopted by the Rajput’s in Northern India. The percussion khanda/pistol is accompanied with a scabbard. The Scabbard is covered in purple velvet, with gold open work mounts. Originally with an Elephant and bird sculpted on handle with a bullet compartment within the hilt. The blade is made of wootz steel. The back edge of the blade has a rare feature where the blade has cut channels to house small silver or steel balls. This feature is typically known as the ‘Tears of the Wounded” as the balls would roll back and forth in the channels, thereby making a ‘whooshing’ noise as the blade was being swung. This feature is entirely decorative and has no practical purpose.

The sword was procured from the Paris Universal Exhibition of 1878 after advice from the South Kensington Museum (now the Victoria and Albert Museum) who helped considerably with the founding of the Castle Museum & Art Gallery in Nottingham.

Numerous objects were sent to the Paris exhibition as part of the ‘commercial collections’ and were to be sold. These came from many Maharajahs including those of Punjab comprising  Patiala, Jind, Nabha and Kashmir as well as from the School of Art in Lahore (Mayo School of Industrial Art)* which was headed by John Lockwood Kipling (1837-1911), father of the author Rudyard Kipling( 1865-1936). This particular object came from the princely state of Patiala,) where numerous objects are in various collections in the UK. The Maharajah at the time was Rajinder Singh (1872-1900) although the object could have belonged to his father Maharaja Mahendra Singh (1852-1876).

Many of these types of Khanda/pistols were ceremonially and as a result, were not intended for use in battle however this object also came with an accompanying powder flask (NCM 1879-105).
Khanda (with pistol) by Sikh Museum Initiative on Sketchfab

Commenting on the sword, Head of the Sikh Museum Initiative, Gurinder Singh Mann, said: “It has been a great opportunity to interpret the rich collection of Sikh artefacts in the possession of Nottingham City Museum. This exquisite sword with a pistol, shows the great workmanship of the Punjab, something which was noted by UK Museums in the 19th Century. The 3d version will allow people to easily access the object within the confines of their own homes and handle and manipulate it virtually.”

The public will also get the opportunity to see the Khanda/pistol at first hand, when it goes on display as part of the revamped Nottingham Castle Museum & Art Gallery in 2021.