In Sri Dasam Granth Sahib: questions and answers, the authors Gurinder Singh Mann and Kamalroop Singh  seek to redress recent debates about not only the importance and relevancy of the Sri Dasam Granth Sahib  (SDGS) for the Sikh tradition, but they also entertain questions regarding its authenticity, authorship, as well  as the historical and contemporary position of this text for Sikh thought. The perspective of the book is  scholarly and grass roots, as both authors have spent time as active members of the Sikh community as well  as having pursued scholarly research of the SDGS at the postgraduate level.
This volume appears to be  released as a needed intervention into the current controversy surrounding the SDGS as well as a brief  installment along the way to a larger, more comprehensive work discussing the SDGS. With a view to  describing some of the less well-understood intricacies of the SDGS, it is a welcome addition to the limited  number of English language volumes discussing the SDGS.

This work is meant to be a resource for students interested in Sikh Studies. As the title suggests, the book is  structured around common questions that many Sikhs today have regarding the SDGS. Indeed, as the  preface to the book reveals, some of the 50 questions posed in this work have been asked and addressed by  the authors previously on the following three websites: (1) www.sridasamgranth.com (2)  www.patshahi10.org and (3) www.dasam.info. However, while it may seem that the volume is merely repeating information that has appeared in other media, the volume is important as the authors have not only revised their original answers, but also because the volume collates these answers giving readers a singular reference for questions regarding the SDGS. The book is well researched, using manuscript sources from the seventeenth and eighteenth centuries as well as cross-referencing issues that arise from debates about the SDGS with passages from the primary Sikh scripture, Sri Guru Granth Sahib.The authors also use illustrations from these manuscripts as well as pictures of seventeenth-and eighteenth-century Sikh relics in order to support the view that they are purporting.

The work begins with a general description of the SDGS, it addresses the question of authorship – a point which is revisited at disparate points in the text, the SDGS’s central theme of the oneness of god is discussed, the SDGS’s engagement with moral themes,and finally a brief synopsis of the SDGS’s contents is provided for those unfamiliar with its outline. One of the central claims of the authors is that the SDGS gives a reinterpretation or, perhaps even, a correction to ‘Hindu’ mythology in order to foreground the moral core of the SDGS. This is done by Guru Gobind Singh not in order to link Sikhs to ‘Hinduism’, but rather to subvert the very idea that ‘myths’ can be claimed by a single historical bloc such as the term ‘Hindu’ suggests. The authors claim that,through the usage of vir ras, the SDGS puts forward a Sikh panthic worldview which exhorts people to take the Khalsa path and become karma yogi or a proactive renunciate. In donning such a stance, it compels people toward becoming true sovereign ethical beings – although this point is not expanded upon. The SDGS is not simple a secondary scripture, nor is it in opposition to Sikhi; more to the point, it is ‘complimentary’ with regard to the central message of Sri Guru Granth Sahib. Furthermore, commentary and understanding of the SDGS require a broader education in and knowledge of Sri Guru Granth Sahib and other Sikh scripture. In taking such a stance, the authors seek to correct the misplaced presumption that Sikhs had a singular scripture and restore the position of a scriptural constellation which fuels the Sikh political–spiritual vantage point.

From here the work considers the manuscript tradition as well as other early texts such as the various Rahitnamas. It is shown that these early works often engage with the SDGS, build upon it to develop a core group of ideals and, thereby, often assume the importance of the SDGS. Further on in the work, a discussion regarding the British Imperial perspective on the SDGS and its relation to the ‘Sikh Martial Spirit’ is provided as well as a description of the work done by the Sodhak Committee, which collated 32 manuscripts of the SDGS in 1895 and 1896. The central points from this committee’s deliberations are also given. These points include confirming that the entire SDGS was the work of Guru Gobind Singh, stating that the dates are verifiable and historical,Guru Gobind Singh used several pen-names throughout, and that some manuscripts contained unique content. The committee was central in providing a standardized text of the SDGS. The legacy of Singh Sabhia, Babu Teja Singh Bhashauria (1867–1933), is hereafter given as one of the central mechanisms through which the debate regarding the SDGS,but also sections of the Sri Guru Granth, begins. Teja Singh expressed his view that so called spurious sections of these texts should be expunged and the remaining material be collated as a single scripture. Despite being excommunicated by not only the Akal Takht but also Takht Hazur Sahib, Takht Patna Sahib, and Takht Kesgarh Sahib between 1928 and 1929, Teja Singh’s legacy continues to fuel secular reformist sentiment regarding the Sikh scripture. The final series of questions deals with contemporary rites and sections of the Sikh panth which continue to uphold the position of the SDGS. 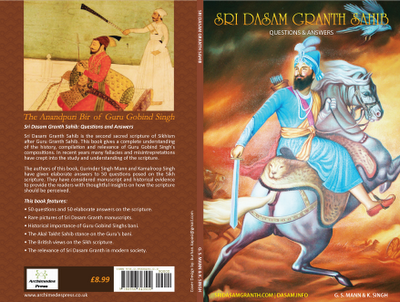 The very structure of Sri Dasam Granth Sahib: questions and answers, a question–answer format reminiscent of exegetical steeks and tikas, reveals one of the major limits of this work: its seemingly theological core. Despite trying to address the rationalist secular attacks from reformist Sikh critics and ‘Western’ scholars, the work itself relies upon the notion of a pre-existent theological core to the Sikh tradition which pervades what comes to resemble a Sikh Scriptural constellation. This is not to diminish the importance of the point that the authors are attempting to make, nor is it meant to takeaway from the very necessary corrective which they are engaging with regard to the rationalist monotheolingual perspective of Sikh scripture. It is merely to make the point that a more elaborate critical core to the argument may facilitate and strengthen the point being made. Beyond this point, the Sikh theological question–answer format can at times lead the work to read as disjoint, jarring, and sporadic. This structural problem often requires a degree of cross-referencing between different questions – an endeavor quickly frustrated by the lack of a comprehensive index.

While meant for students of Sikh Studies, this work assumes some degree of familiarity with Sikh textual materials, history, and theological debates. As such, the intricacies of the position being taking regarding the validity and centrality of the SDGS maybe missed by the uninitiated. Therefore, it is better suited to Sikhs or scholars with an active interest in textual and theological questions. The position of the authors is that the Dasam Granth is a Sikh scripture; that it is central to the development of Sikh rites and ceremonies; that the evolution and continued adherence to the Khalsa ideals of Guru Gobind Singh depend upon the SDGS; and, lastly, that the work in its entirety was originally authored by the tenth and last Sikh Guru. As such, the argument made is that when questioning the validity of the SDGS, a kind of symbolic violence is being done to the entire Sikh tradition. To extrapolate somewhat from the position taken by the authors in this work, one may claim that the debates around the SDGS are centered upon the position of Sikhi as a religion within the confines of a hegemonic secular discourse.In short, the ideals expressed and the reinterpretations of central ‘Hindu myths’in the SDGS need to be put in doubt if the discourse of secularism is to dominate. Thus,this work attempts to correct some of the invasive machinations by secular scholars of religion. As a brief installment of a larger more comprehensive volume discussing the SDGS, Sri Dasam Granth Sahib: questions and answers, raises some important points and provides a necessary corrective to the ongoing machinations of a minority of people regarding the position of the SDGS in the Sikh tradition and textual corpus. However,due to some of the structural and critical constraints outlined, the main argument’s dialectic rings hollow and leaves one anticipating the larger work referenced in the text’s preface.