The Throne of Akal and the Holy relics of the Khalsa
by Gurinder Singh Mann, Leicester, UK.

Under the rule of the Sixth preceptor Guru Hargobind, the ‘Throne of the timeless one’ or Sri Akal Takht Sahib was created. There was already the Harimandir Sahib but temporal affairs also needed to be conducted. The immortal throne was a necessity based on the concepts of miri piri and hence Guru Hargobind became known as miri-piri ka malik. The throne became the  platform where commandments (Hukumnamas) would be ushered, a concept that stands true to this day.

Shastars were placed at the Takht signifying the sanctity of this sacred place.  The placing of Shastars on the any ground would became the cornerstone of how Dharmsalas and Gurdwaras would be formed. On my recent visit to the Throne of Akal, it was seen the prakash and recitation of the Guru Granth Sahib was on the balcony of the Takht. This was the the original maryada and can be seen in many old photos. This has recently been reintroduced into Takht Sahib. (1)

As a result when the sangat enters the Throne they are paying obeisance to the Shastars in the Gold enclosed casing which is clearly visible to all. This is an important factor which separates a Takht from most Gurdwaras.

When Ardas was being recited, and after it’s completion and almost in unison the Ranjit Nagara (kettle-drum) was also beaten. The thunderous sound penetrated the air of the Harimandir Sahib complex. This was a symbol of Raj-niti (sovereignty) given to us by the Gurus. 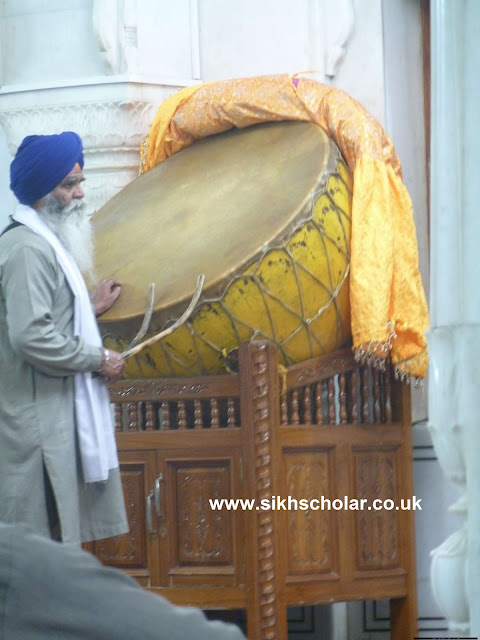 On a daily basis this is the same routine that is followed and is not complete without the darshan of the historic relics at the Takht. The sewadar brings out a sacred Shastar and an account or rendering would be given to the sangat. There are numerous relics of the Sikhs kept at the Takht. These includes Shastras, arrows, Guns, and chakkars of the Gurus and other Khalsa. 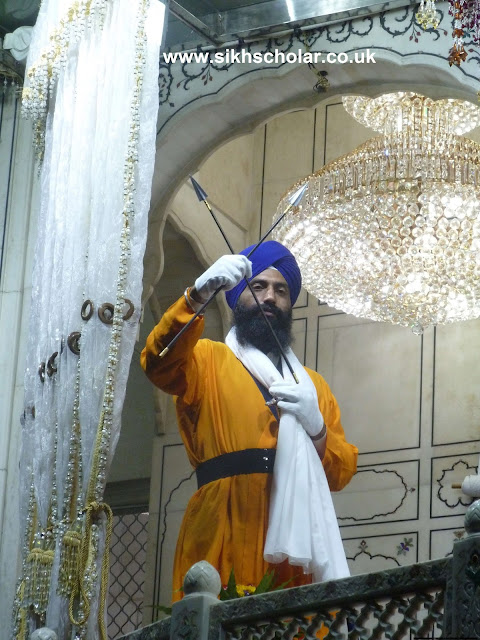 Some of these include the following:

These historic relics of the Sikhs are something to behold and the maryada that is followed is a testimony to the respect that is given to Shastars in the Sikh religion. 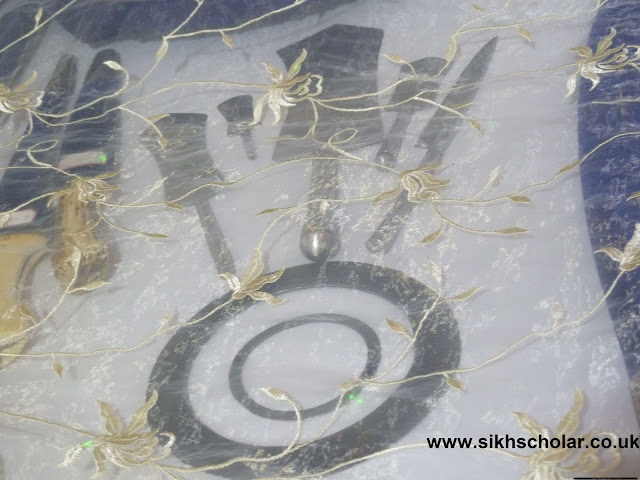 After the Darshan of the Shastars, they are then placed in rumallas and are carried to the lower sanctum of the Takht. This is where the baoli or well was created by Guru Hargobind. I was privileged to be allowed to go into the lower sanctum. When the Shastars are taken there they are neatly arranged on a special bed like podium and covered up. A canopy covers the podium showing the sanctity given to the Shastars. Ardas is recited and all the sangat bows (matha tekhna) to the Shastars. The role of Shastars within the Sikh religion is further extended into Shastar Puja and also the science of weapons or Shastarvidyia.

I was allowed by the sewadars to have a closer inspection of the Shastars and was given further details on their history. This was a special day for myself and one i will never forget.

Shastar Darshan also takes place at other Takhts including: Takht Hazur Sahib and Takht Patna Sahib. A similar practice is also undertaken at some Gurdwaras as well.  Many Gurdwaras also symbolically place Shastars and in front of the palki of Guru Granth Sahib, these are normally placed on lower ground.

Gurinder Singh Mann, is historian and author. Visit his scholarly blog at www.sikhscholar.co.uk His other projects and work can be seen at www.gsmann.com.