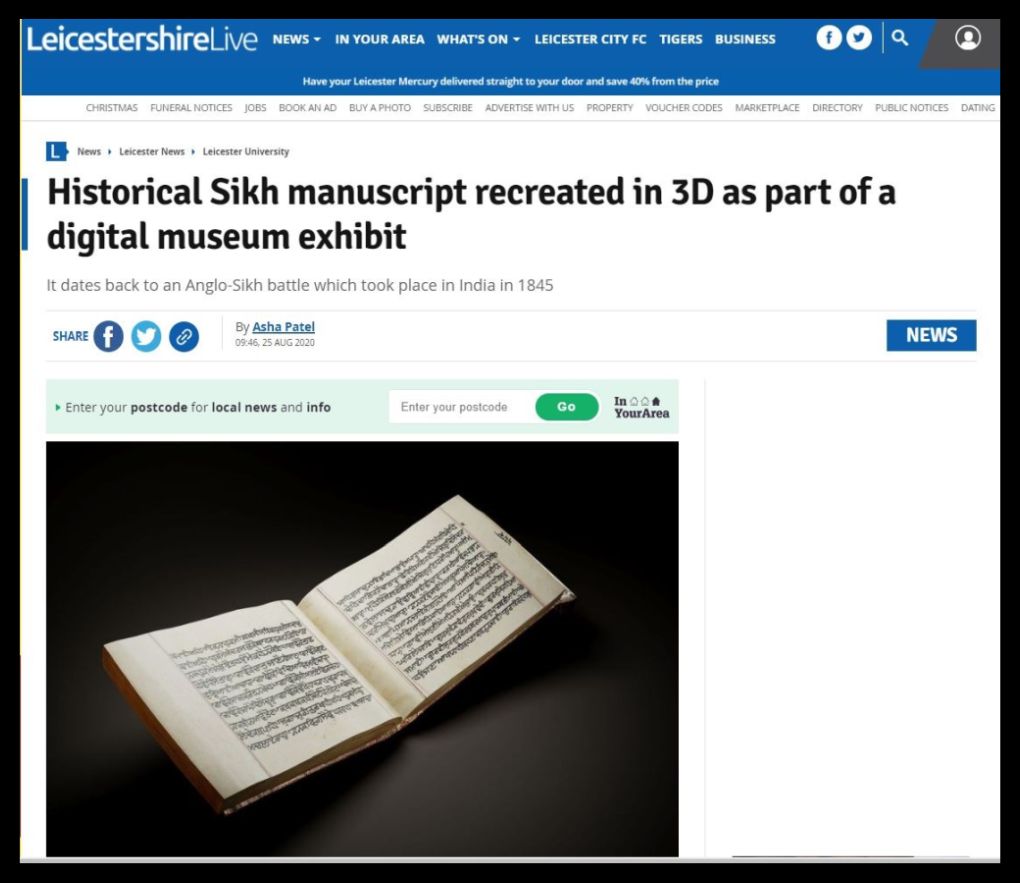 Thanks to Leicester Mercury/Leicester Live for this article written by Asha Patel.

The University of Leicester Sikh Manuscript in 3D The historical manuscript has been repackaged as a digital experience using a mix of photography and computer-aided design (CAD).

A historical manuscript dating back to the early 19th century has been recreated using the ground-breaking 3d technology.

The manuscript has been part of the University of Leicester collection since the early 19th century when it was donated by a collector Harry Hardy Peach (1874-1936).

In a unique project undertaken by the Leicester-based Sikh Museum Initiative, the manuscript, which was taken from a battle between the Sikh Empire and the British East India Trading Company in 1845 has been recreated as a 3D animation.

The Battle of Ferozeshah in Punjab, India in 1845, was one of series of battles within the Anglo-Sikh wars that took place at the time.

Within the manuscript are elements from Sikh scriptures including the Guru Granth Sahib which is the most central scriptures within the Sikh faith.

Sikh historian and Director of the initiative, Gurinder Mann Singh told LeicestershireLive: “I came across the manuscript listed in the university’s collections back in 2013 which was when it all kicked off.”

He contacted the university and which led to the manuscript being loaned the 2017 exhibition ‘Anglo Sikh Wars: Battles, Treaties and Relics’ which took place at Newarke Houses Museum.

This set-in motion a relationship between the Archives and Special Collections at the University of Leicester, headed by Dr. Simon Dixon and the Sikh Museum Initiative.

Now, in a “second phase” of the project, which was funded by the National Lottery Heritage fund parts of the manuscript will be accessible as a 3D animation available on the Sikh Museum Initiative’s dedicated website.

Taran Singh is the artist and developer behind the 3D model which will be revealed online today (25 August) following a free webinar about the history behind the project.

He said: “It was wonderful to be able to see the final model come together and the animation gave it a whole new level of interactions that would not be possible in a traditional museum setting.”

It is not known how the manuscript came to England but records show that it came into the collection of a well-known collector of rare books who died in 1936, Harry Hardy Peach.

A number of items he collected were given to Leicester Museum in 1969 and over 1500 books were donated to the University of Leicester. The manuscript was one of them.

Gurinder said: “It’s a history within a history – something we will go into more detail on in the webinar.”

Ahead of the webinar, which is at midday, Dr Simon Dixon who has been involved a project which explores the early history of the University of Leicester and it’s founders such as Harry Hardy Peach, said: “The Sikh manuscript he donated to us is a fascinating and significant item with a rich history.

“The project team have been delighted to collaborate with the Anglo Sikh Virtual Museum to tell the story of the manuscript.”

The 3d model can be seen at www.anglosikhmuseum/relics

Original article can be seen here