Napoleon Bonaparte to the Duke of Wellington: The sword at the Battle of Ferozeshah 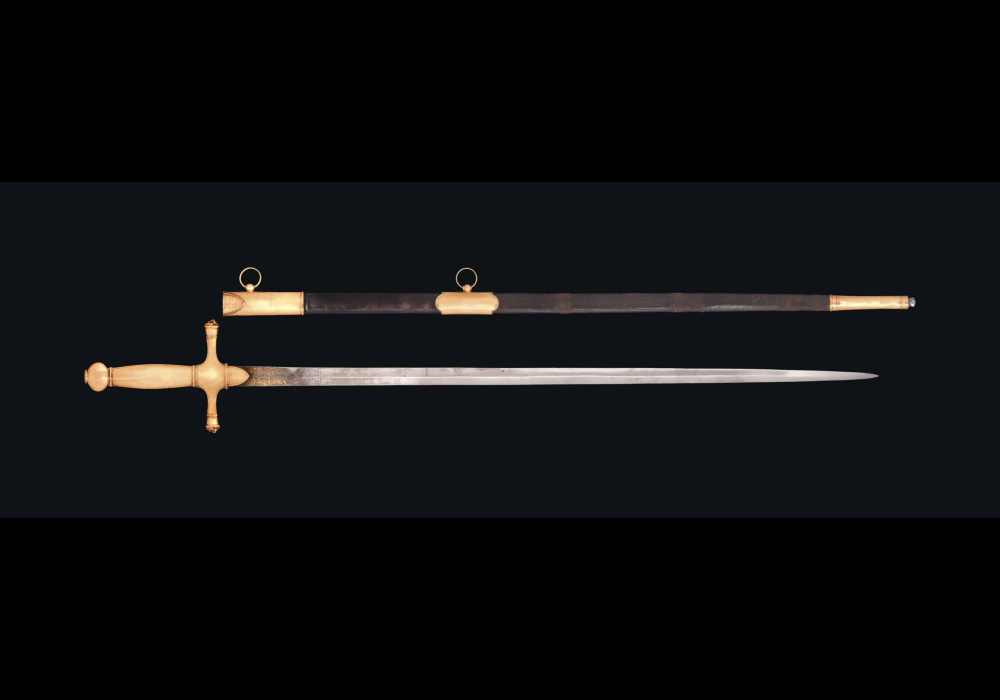 The Sword referred to is a glaive that normally describes a single-edged blade on the end of a pole. However, in France, the word was also used to describe any sword. It was in France where this sword was made and bears the  Maker’s mark of Martin-Guillaume Biennais (1764-1843), goldsmith to Emperor Napoléon I. As a result, the sword has been deemed to have belonged to Emperor Napoleon Bonaparte (1769-1821), the French statesman and military leader. He rose to prominence during the French Revolution and led several successful campaigns during the French Revolutionary Wars. After becoming Emperor he fought against a coalition of countries during the Napoleanic Wars. The coalition was led by the Arthur Wellesley, 1st Duke of Wellington, KG, GCB, GCH, PC, FRS (1 May 1769 – 14 September 1852) who was an Anglo-Irish soldier and Tory statesman who was one of the leading military and political figures of 19th-century Britain, serving twice as Prime Minister. He also made his claim in India and fought against the Mahrattas and was pivotal in the East India Company when they took over Delhi in 1804-1805.

The coalition defeated Napolean Bonaparte in the famous Battle of Waterloo which was the decisive engagement of the Waterloo Campaign and Napoleon’s last. He was exiled some time later. The Duke of Wellington seems to have procured the sword during this time and etched on the sword is ” This SWORD was worn by / The DUKE of WELLINGTON / from his entering into PARIS / July 1815 to 1817.” The exact time of procuring the sword is not known.

Henry Hardinge, 1st Viscount Hardinge, GCB, PC, (1785 – 1856) was a British Army officer and politician. He served in the Peninsula War and the Waterloo Campaign he became Secretary at War in Wellington’s ministry.  He went on to be Governor-General of India at the time of the First Anglo-Sikh War and then Commander-in-Chief of the Forces during the Crimean War. It was in 1817 that the Duke of Wellington gave this sword to Henry Hardinge as per the etching ” FROM The DUKE of WELLINGTON / TO SIR HENRY HARDINGE / AT THE REVIEW of The PRUSSIAN ARMY / NEAR SEDAN in FRANCE / 1817″

How did this sword wind up in the Punjab?

In May 1844 Hardinge became the  Governor-General of India. Following the death of Maharajah Ranjit Singh and some years later the relationship between the British and the Sikhs  broke down. As a result war first Sikh War ensued in 1845. Hardinge, in a unusual move as a Governor relinquished his command  to serve as second in command under Commander in Chief-Hugh Gough. At the Battle of Mudki on 18 December 1845 Gough commanded the right flank and Hardinge commanded the left flank. The battle was indecisive and led to the battle of Ferozehah which was fought on 21 December and 22 December 1845. The Sikhs were led by Raja Lal Singh who  supplied the Sikh positions to the British most likely to Henry Hardinge.

The Sikhs were estimated as having between 35,000 fighting force to around 25,000 however not all of this was deployed in the battle (with 17,000 only engaging). The British figures were recorded as 18,000 with one third Europeans and two thirds sepoys. The Fauj-i Khas (elite wing of the Khalsa army) was commanded by Dewan Ajodh Prashad, artilery headed by General Ilahi Bakhsh, together with Methab Singh and Bahadhur Singh’s brigade.

The fighting began at 3.30pm when Gough led the right, Hardinge in the centre and Littler the left wing of the assailing force. Such were the quick volleys of this firing that within ten minutes two hundred British soldiers were either killed or crippled and Littler retired with his force to Misreewallah. The power of the Sikh guns were superior to the British, leading to the depleting reserves of their ammunition.

As darkness fell, General Harry Smith’s division launched a renewed attack, which overran several Sikh batteries and penetrated into the midst of the Sikh camp, around the village of Ferozeshah itself, before being driven back by counter-attacks. Fierce fighting continued until midnight. Many casualties were caused on both sides as a Sikh magazine exploded, British losses increased. Walter Gilbert and General Wallace showed some success however losing 270 men in the exploit. The Sikh horsemen were driven back by a British cavalry regiment, the 3rd Light Dragoons at which time the British also withdrew.

The British Army at Ferozshah on the 21st December 1845. Painting by Henry Martens.

The British now found themselves in a grave position. The British were without food or water through the night. Cunningham who was present in the battle gives a graphic description of the battle scene, “Darkness, and the obstinacy of the contest, threw the English into confusion; men of all regiments and arms were mixed together: generals were doubtful of the fact or of the extent of their own success and colonels knew not what had become of the regiments they commanded or of the army of which they formed a part.” The future of the British Empire remained in the balance.

Diary of Sir Robert Cust, who was present in the battle states, ‘December 22nd. News came from the Governor General that our attack of yesterday had failed, that affairs were desperate, that all State papers were to be destroyed, and that if the morning attack failed, all would be over; this was kept secret by Mr. Currie and we were concerting measures to make an unconditional surrender to save the wounded, the part of the news that grieved me the most.’ General Sir Hope Grant who was also present stated ‘Sir Henry Hardinge thought it was all up and gave his sword, a present from the Duke of Wellington and which once belonged to Napoleon-and his Star of the Bath to his son, with directions to proceed to Ferozepur remarking that if the day were lost, he must fall.’ So this is where the sword gains importance and recongintion.

The sword was considered of major impoortance could not be taken into Sikh hands if the British lost the next enagagement. However this was not the case, Raja Lal Singh left the Sikh forces without any direction. On the British side the right of the British line Gough committed Brigadier White’s cavalry brigade; HM 3rd King’s Own Light Dragoons, 4th Bengal Light Cavalry (Lancers) and the 9th Bengal Irregular Cavalry, to an attack on the corner of the fortifications. Hardinge and his units were on the left. The Sikh were over run by the British. Rajah Tej Singh appeared with his forces and after an exchange with the British for two hours he ordered a retreat to the bewilderment of his Sikh forces and British alike. With two commanders of the Sikh army retreating within a space of two days the dual role and treachery of their cause was open for all to see on all sides.

The British defeated the Sikhs and eventually won the First Anglo Sikh War in 1846. Hardinge concluded the campaign with the Treaty of Lahore with Maharajah Duleep Singh on 9 March 1846 and the Treaty of Amritsar with Maharajah Gulab Singh on 16 March 1846. He was created Viscount Hardinge of Lahore and as a result he left the Punjab with the French sword which was in the near clutches of the Sikhs.

Read more about the Anglo Sikh Wars in the Sikh Museum Initiative project at www.anglosikhwars.com

This 3d model was first exhibited at the exhibition: Anglo Sikh Wars: Battles, Treaties and Relics in 2017. We have now recreated it so it can be shared widely online.