Sikh scholar discusses the history of the Akali Nihangs 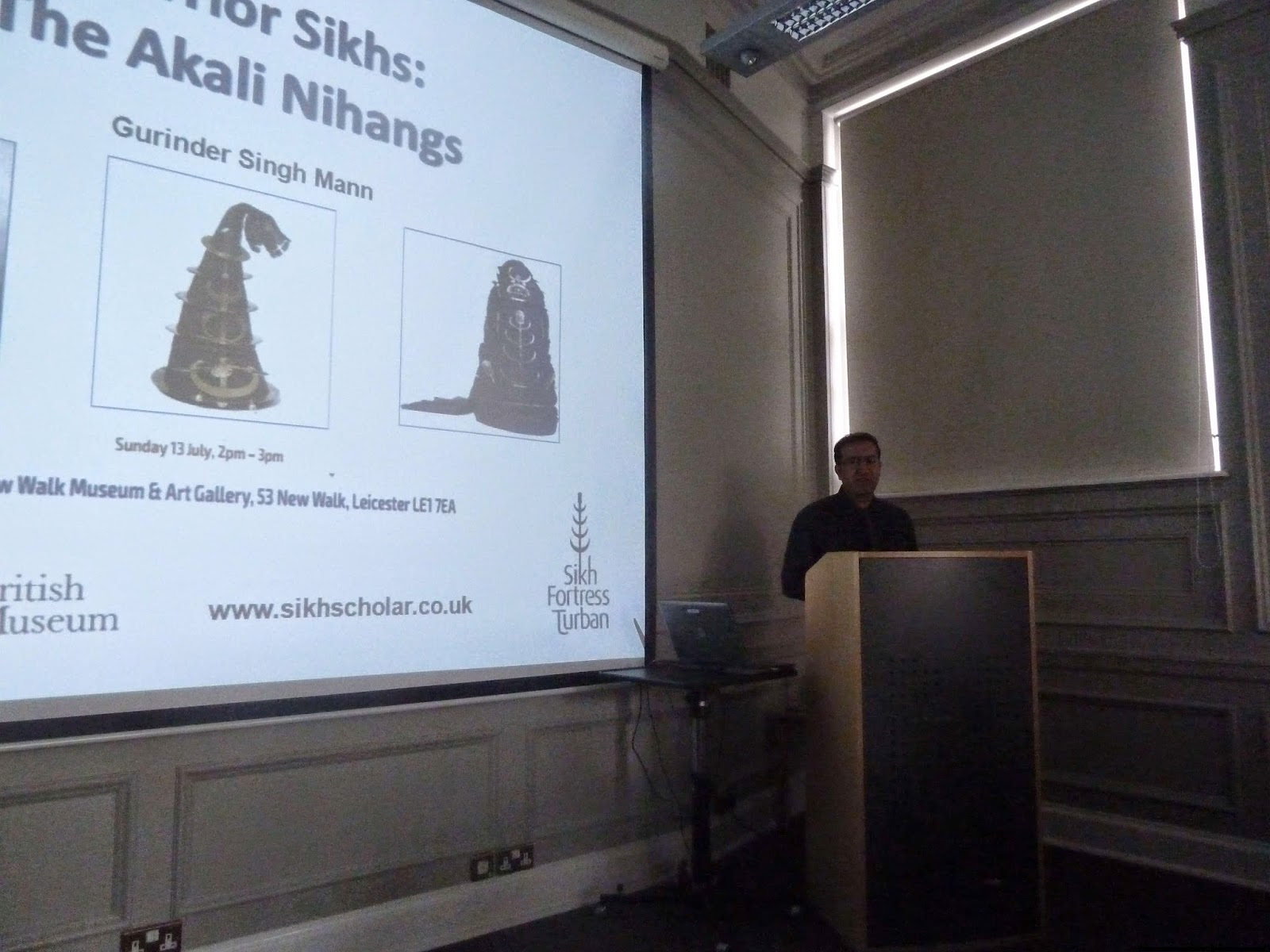 New Walk Museum and Art Gallery, Leicester on 13th July 2014 hosted a lecture on the Akali Nihangs. This was part of the exhibition: SikhFortress Turban running until 17th August 2014.

The talk was announced by Daljit Singh Makan who works with various organisations and groups to promote the Sikh faith.  The speaker was Historian and Author, Gurinder Singh Mann, himself from Leicester. The talk considered the role of the Sikh army from the inception in the 17th Century to the role played by the Sikhs under Guru Gobind Singh. 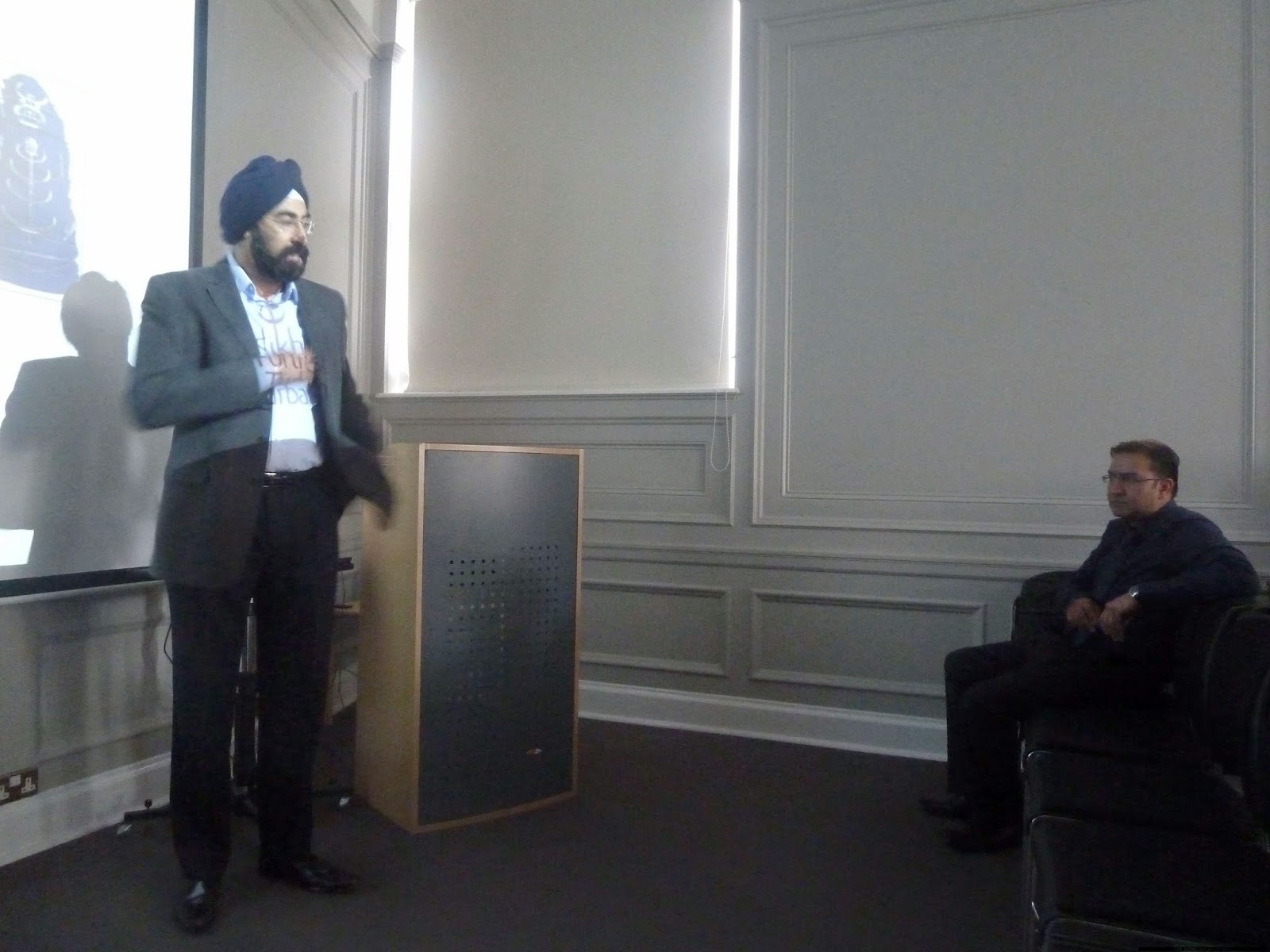 Daljit Singh Makan introduces Sikh Scholar Gurinder Singh Mann
Mann using rare sources and anecdotes showed how the Akalis were intially formed under Baba Buddha and Guru Hargobind. The development continued under Guru Gobind Singh who on initiating the Khalsa wore the blue attire. Using the Rehtanamas, verses from Bhai Gurdas 2nd and the Sri Sarbloh Granth, Mann showed how the terms Akalis and Nihang were similar and dissimilar.
Using verses from the Sri Dasam Granth Sahib, Mann showed how the word Nihang was deployed by Guru Gobind Singh in his compositions. The knight-errants or Akalis of valour who held sway in the eighteenth century was a story of courage, wisdom and battle tactics. The warriors discussed including Nihang Baba Gurbaksh, Nawab Kapur Singh, Jassa Singh Ahluwalia and Baba Deep Singh. As well how the Akali Dals developed under the Misl system under Buddha Dal and Taruna Dal. 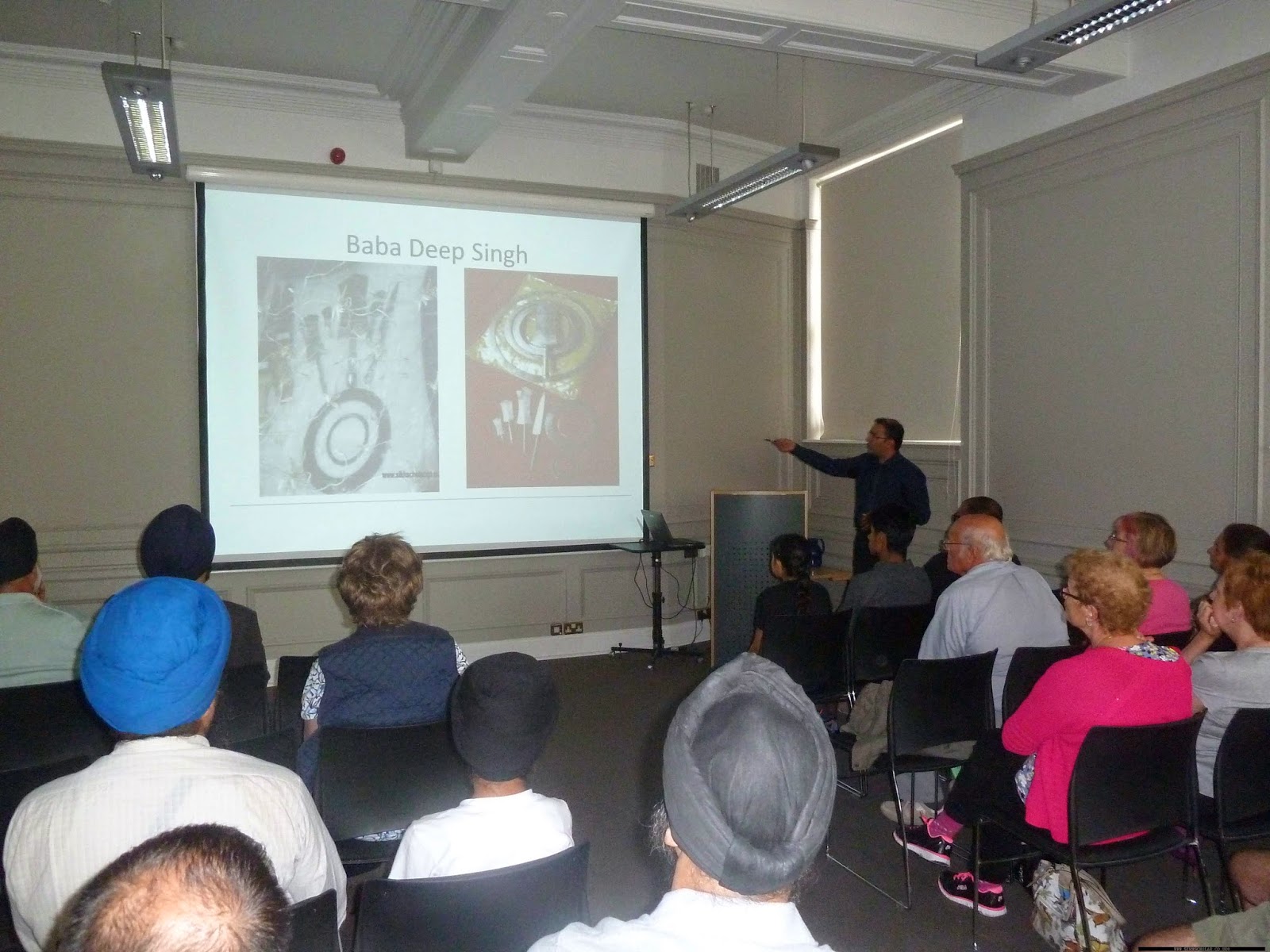 The relics of Baba Deep Singh
Mann also showed frescoes of the Akalis in different locations in India. He also made the valid point that Sikhs were depicted incorrectly by modern painters and by using frescoes and historical texts a better analysis could be used. The vocabulary or Nihang Singh di Bole was also discussed and how this was developed by the Khalsa under testing times.
Leading up to the British period, the role and significance of Akali Phula Singh was elaborated on. The territorial gains made by Maharaja Ranjit Singh rested on many occasions the deeds of the Akali Nihangs.
It was also shown by Mann, the contribution of the relatively unknown Baba Hanuman Singh who fought in the Anglo-Sikh wars and courted martyrdom after his Akalis were betrayed in Patiala. It was also at this time that the Akalis suffered huge losses and after the annexation of Punjab the Akalis faced further persecution by the British. With the advent of the Akali Dal-political party and the coming of the SGPC, the Akalis lost many of their Gurdwaras. 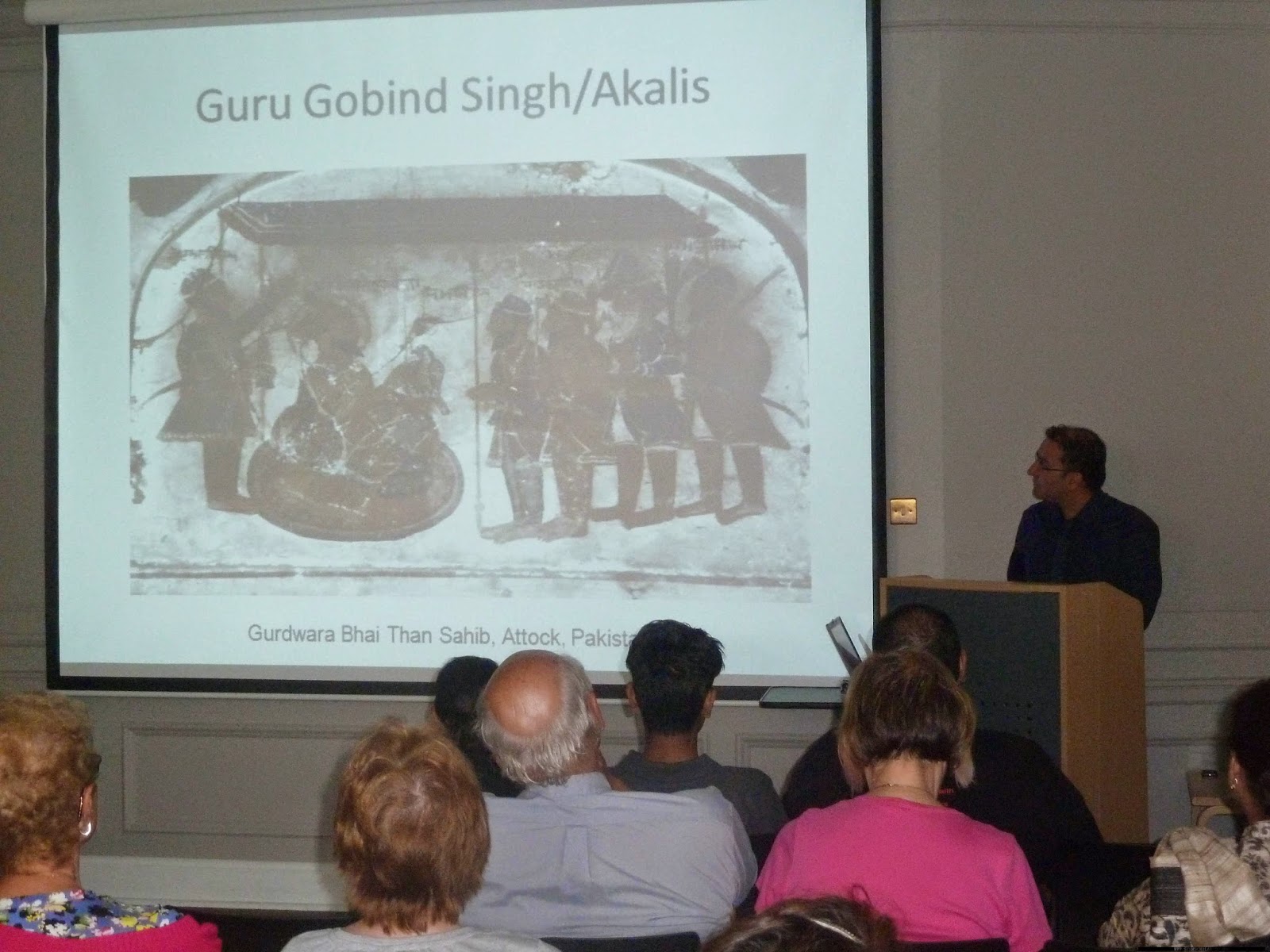 Frescoe showing Guru Gobind Singh and his Akalis
In modern times the Akalis have much to contribute however at the same time they need to explain their maryadaand traditions as they are misunderstood by the Sikh masses. Mann did a great job in showing the Akali Nihangs in a great light. The lecture was followed by questions where Mann explained how the Akalis did not enlist into the British Army and as a result did not fight in the world Wars. Mann also gave information on the Akali Turbans as well as explaining the role of the Sikh Misls. Mann thanked Malika Krammer (Curator) and the New Walk Museum, the British Museum and Daljit Makan.
The lecture was appraised by Sikh and non-Sikhs alike that were in attendance. It is a credit to the New Walk Museum that an exhibition and lectures on the Sikhs are taking place at public institutions where non Sikhs can gain a better understanding of the Sikh faith.
Forthcoming from the Gurinder Singh Mann is the book Akali Phula Singh and his Turban.