Photographed at Akali Nihang Singh Gurdwara, adjacent to Takht Damdama Sahib in 2006.
The Buddha Dal was in charge of numerous Gurdwaras across India and Pakistan before partition. After the Anglo-Sikh Wars the British tried to control and change our maryada. The Sikhs never paid heed to the words and wisdom of Akali Phula Singh who was fighting the British at the start of the nineteenth century. The contributions of Akali Baba Hanuman Singh have seldom been recognised in Sikh history.
The Buddha Dal still hold and control many Gurdwaras in India. The concept of Gurdwara as created by the Akalis is not what we see now. The Akalis would place their Shastars (weapons) and recite Bani.
The Weapons was the embodiment of the Guru and the embodiment of Gurbani. Incense would be given to the Shastars(Shastar Puja) as this was a sign of sacredness.
In the dark times of the twentieth century whilst many have looked at the Singh Sabha as the reformers, they have forgotten the contributions of Sahib Singh Kaladhari. In fact this was the time when the Akalis were deposed as being caretakers of Gurdwaras. 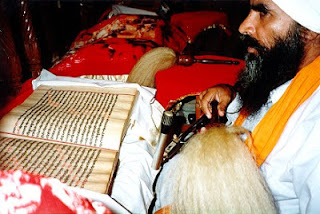 An handwritten manuscript of the Sri Dasam Granth Sahib. Located at Gurdwara Srinagar, between Rishikesh and Gobind Ghat.

Overnight the Buddha Dal was seen as being part of the problem. Sahib Singh went to prison fighting the British to bear Arms and wear the Kirpan. The Tat Khalsa was not only fighting  the British but also the Neo Sikhs (SGPC, Akali Dal). The worst poison is when you are fighting your own. However this has never been a new concept in Sikh history and the Nihangs only have allegiance to Akal Purakh.

To this day the battle continues.