When I began my research on the Granth of Guru Gobind Singh (Dasam Patshah Ka Granth) in the late 1990’s I noticed that some of the rhetoric was fairly modern. This was at the same time that the IOSS (Institute of Sikh Studies) based in Chandigarh was denouncing Guru Gobind Singh’s bani.

Articles were written stating that there was no history regarding the creation and compilation of the Sri Dasam Granth. A decade earlier the RSS (Rashtriya Sikh Sangat) began its campaign of creating unity between Hindus and Sikhs. This campaign focussed on saying that the Sikhs were essentially Hindus; they used some of the teachings within the Dasam Granth to promote this idea. With the focus on the Dasam Granth by a non-Sikh group, this started bothering some Sikhs. The Hindu themes within the Granth were under the radar, as most Sikhs could not decipher concepts and ideas of Guru Gobind Singh, they started to reject the Dasam Granth out rightly. 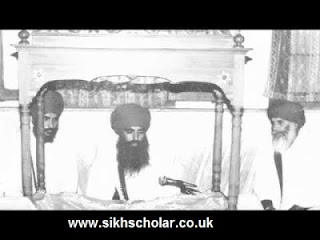 Sant Jarnail Singh Bhinderwale
After the events in 1984 and Operation Bluestar, a vehicle of hate began and in some places has not ceased. Sikhs were right to be aggrieved and to question their place within India. Sant Jarnail Singh Bhinderwale from the School of Damdami Taksal was not only versed in the Guru Granth Sahib and Sri Dasam Granth but was also a Kathavak on the Granths. Whilst he talked about the mainstream domination of the Sikhs, he spoke on the importance of Guru Gobind Singh’s bani and how the Sikhs were lost without the Granth.
The Khalistan movement over the years forgot the message of Guru Gobind Singh and Sant Jarnail Singh Bhinderwale. The debate or narrative is a modern one and as a result shows it’s major growth after 1984. The internet generation has shown that preachers and Sikh youth are debating the Granth without any research. Either way the debate is a modern one.
This research will be published in a forthcoming collection of papers as part of the Sikhs in Europe project. The paper on Dasam Granth was given at Lund University, 2013.