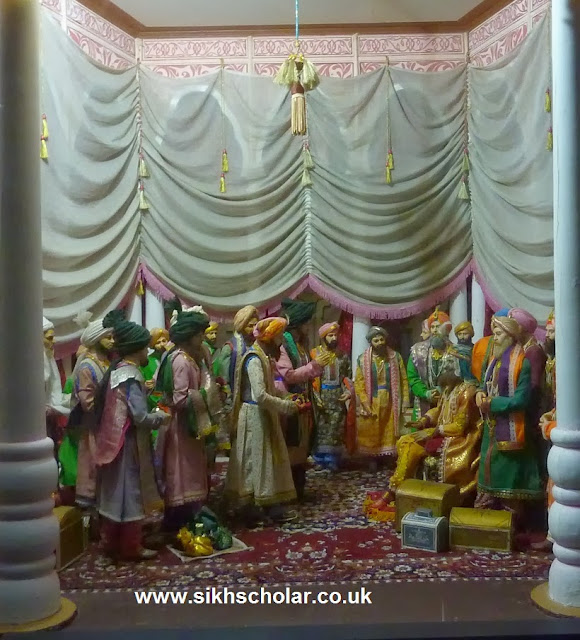 Shah Shuja Durrani was Ruler of Afghanistan in the early period of the 1800’s. He was later deposed and became a captive the Panjab territories. In order to aid Shah Shuja back to the throne, Maharaja Ranjit Singh made an oath on both Granths if he was to receive the infamous Koh-i-Noor he would undertake this task. The account suggests the faith the Maharaja had on both Granths and interestingly for both Scriptures to be present at the time of receiving the Koh-i-Noor diamond.

The Shah was threatened with imprisonment in the fortress of Govindgarh, and at length, after two months’ resistance, wearied out with perpetual harassing, seeing his family and servants half-starving and appreciating that longer refusal would only end in his captivity or death, he promised to give up the diamond if the Maharaja on his part, would promise him protection and friendship in the most solemn manner. This the Maharaja did, having a document drawn up in which he promised on the Adi Granth and the Granth of the loth Reign[Dasam Granth], to be ever the friend of Shah Shuja and to endeavour to restore him to the throne of Kabul. The Afghan then invited Ranjit Singh to come and receive the diamond in person. He arrived with a few attendants and was received in silence which was unbroken for an hour, when the Maharaja reminded his new friend and prisoner of the object of his visit. The Shah ordered one of his servants to bring the diamond. A packet was brought in and unwrapped, and when the Maharaja  saw that it was really the stone he coveted he seized it and left the house without even bidding farewell to the prince.

Account from: RULERS OF INDIA: Ranjit Singh and AND THE SIKH BARRIER BETWEEN OUR
GROWING EMPIRE AND CENTRAL ASIA 1905. By Sir LEPEL GRIFFIN.

Also see: British and the Sikhs; The Treaty Of Duleep Singh and Surrender of the Koh-i-noor.